A Gem in the Ark? & Argentina, a Geologists Paradise

Yesterday I managed to squeeze in about an hour and a half on my book. I was very pleased with my progress and felt a little less pressured to get MORE done. As usual, I saved the day’s work to my flash drive.

When I went back to add another thought after supper, I was shocked to see everything I’d done that day was gone. Accidentally, I’d copied and replaced my files from the flash drive to my computer instead of the other way round!

So, I’m refinishing my Carbon-14 discussion. Plus, I figure God might want me to be more thorough on the Noah’s Flood section.

Here’s something I ran into, but probably won’t fit in my book (unless you think it’s so cool I should mention it):

Ark Encounter Blog: When is a Window Not a Window? I haven’t had a chance to cover this, but I’ve heard about the possibility of the Ark having a gemstone to light the inside. This isn’t as far-fetched as you might think. Many ships used faceted glass to provide light below decks. Since Noah was wiser than any recent ship builder, it’s not a stretch to picture him installing something like this into the ark’s roof.

Check out this page (including where you can buy one for yourself):

A deck light or deck prism is a prismatic glass set into a ship’s deck, to let natural light below. They areespecially useful when an open flame would be hazardous, such as with a cargo of coal or gunpowder. On colliers (coal ships), prisms were also used to spy on the cargo hold; light from a fire would be collected by the prism and be made visible on the deck even in daylight.

In normal usage, The prism hangs below the ceiling and disperses the light sideways; the top is flat and installed flush with the deck, becoming part of the deck. A plain flat glass would just form a single bright spot below– not very useful general illumination– hence the prismatic shape.

The names “dead light” or “deadlight” are sometimes used, but more often refer to non-opening, plain-glass lights [meaning regular prisms could be opened] .

The earliest deck prisms with provenance are from the 1840s. Presumably they were used earlier, but how much earlier is unknown; the origin of the idea is lost, and glass is difficult to date. [emphasis added]

Does this seem reasonable to you? It sure does to me! I wonder if the Ark Encounter is going to special order a giant one of these; I bet you could grow a garden under one.

Next, I was trying to find a giant example of a petrified tree for discussing Gofer wood. Except for a couple sensational (but possibly true) creationist sites, I didn’t have any success. 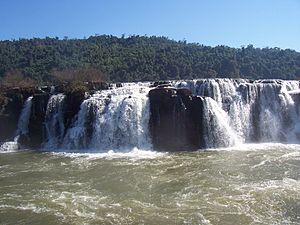 But, I ran into a cool page of natural wonders in Argentina.

They toe the long-age-millions-of-years line, but the pictures and places are amazing. You could think through how many can be easily explained with a great Flood instead of masses of time.

First off, I found this article very interesting and I strongly suggest you include this in your book. I also read a fictional book once that had stones that produced their own light off the magnetic strength of the planet. They said the stones stopped glowing because the magnetic strength got too weak when the effects of sin came on. All very interesting and something we both might have to look into.

I know how that is with books, I have done that too many times to count! I hope you are able to write it back quickly!

LOL! I don’t think I could substantiate magnetically glowing stones. But, if you really want the prisms….
Thanks for reading Jacob. How’re the dino videos coming? 🙂

Yeah, but it is a pretty interesting idea! Yes, I think you should mention that in your book. A lot of people find geology boring and if they can see such a true gem (no pun intended) in the geology world . . . it might change their outlook.

I haven’t made anymore dinosaur videos yet except the one you watched but I did make a bunch of other videos. I even made a page for them on Already Answered.org. Just check out the “Video” page under “About”. Hope you enjoy those!