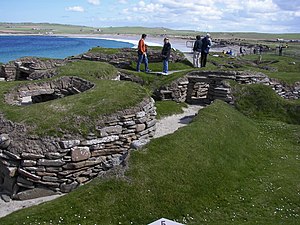 My dad has an amazing library including a book I’ve just borrowed on Inventions.  They start way back in the “Stone Age” with needles, paint, pottery, boomerangs, and move on to more modern stuff like sewers. When I saw that page I knew I had to cover it here.

The book mentioned that they had sewers in Scotland about 3,000 BC by secular dating, but nothing more. So, I started a GoodSearch and found lots of stuff!

Scotland did indeed have homes with draining toilets almost as far back as people have lived there. One of the northern Orkney Islands has a collection of buildings known as Skara Brae (don’t miss this link, it has some great pictures). After living in the area long enough to have organic material (garbage) to insulate their homes with, the people built their homes completely of stone since there don’t seem to have been trees there (still aren’t any to this day). Here’s what the website says about these people:

“The relics that he and his companions collected along the way were convincing proof that the site was indeed ‘Stone Age’—not a scrap of metal was found. In fact, it dates to what is known as the Neolithic period, when people first began to farm.”

So, they know how long ago this must have been because they didn’t have any metal. Which would mean that if I move somewhere without any electronics, I must have lived in the 19th Century. But were these metal-less people stupid, almost-ape men? Have a look at this:

“They normally had small cells built into the walls, some of which were used for storage but there were a few with drains leading to  the outside which Childe believed to be lavatories. The drains from the individual huts emptied into a sewer system which connected the entire village.” 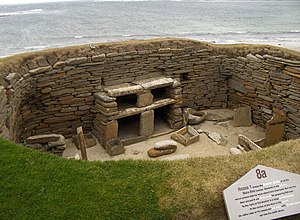 All the regular houses also had something very much like a chest of drawers without the drawers. We can only guess whether this was for storage, or some sort of ceremonial platform (although no idols were found!). They also had some of those stone balls I wrote about earlier. Cool. The people who made these things were no dummies!

Eventually this village was abandoned for no reason that we can tell for sure. It’s as good a guess as any that it had to do with the end of the Ice Age that Dancing from Genesis specializes in covering (be sure to check out his webpage on the Ice Age, too).

Let’s have a short look at other early drainage/sewer systems:

The most famous early sewer system was in the Indus Valley of western India/eastern Pakistan. They had a number of large cities with complex and well-designed wells and separate covered sewer systems. They knew how water flows and how to use this to their advantage to have a clean and well-functioning cities as far back as human history goes. This blog post has a bunch of great pictures and talks about this system. They were no dummies either!

The Minoans of Crete had a complex water system in their labyrinth palace at Knossos with covered drains, pipes, baths and flushing toilets. Lots of pictures can be found here at Sewer History. This civilization reached its flower during the Ice Age as well. Although this civilization is ranked later than the one in Scotland that is just because we have more ways to check, like known pottery styles and written histories. I bet if the Scots had written stuff down or had the money to import pots from the Mediterranean they would date to more recent times, too.

Here are some more civilizations that had sewers in ancient times:

Babylonia Turkey, Iran, Israel (follow link to the next page for Israel)

Mayans (they may have had fountains, too)

China  plus 900 year old drain saves city from flooding and really ancient metal pipes from near a pyramid that the website says were put in by aliens (rather than by really knowledgeable early people).

The past two years my oldest kids and I have read through Usbourne’s Book of World History. They did cover how the first cities in the Indus valley had good drainage systems, but they didn’t talk about proper sewers in civilizations until the Roman Empire. I wonder why they left this stuff out?

My starting sources online were these two pages:

Sewer History: Tracking down the roots of our sanitary sewers

A Brief History of Toilets by ar.colton

Have you read The Dirt on Clean by Katherine Ashenburg, or Bill Bryson’s book At Home? Both have fascinating thoughts on cleanliness through the ages. I was so riveted by Ashenburg’s book that I told everyone about it, for days. Fun, fun stuff.

Never heard of those books, but then, I never really thought about this topic until last week or when reading about the summer plagues that London and other medieval cities suffered from. Thanks for the references. 🙂

Oh, no problem. You’re just the only other person willing to engage in a conversations with me about public sanitation. Thank YOU!

LOL! My parents are a doctor and nurse, so it has to be pretty gross before we get squeemish! 😀