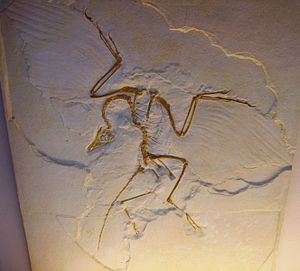 I’m excited to share this bird with you since it has fascinated and puzzled me for many years.  If you take a look at any book on dinosaurs you’re likely to run into this critter because it seems to be just what the evolutionists are looking for to prove that dinos turned into modern birds.  But is it really?  Let’s take a look at what we do know about this animal.

We know the archaeopteryx [arky–op–tuh-ricks. Hey, it has the word ARK in it!] lived in the area that is now southern Germany (I wonder if they were fond of soft pretzels and sauerkraut? Just kidding!).  This area was on the edges of a shallow, warm sea a lot like the one that covered what is now the American Midwest.

Several specimens of Archaeopteryx lithographica compared in size to a human.

One of the surprising things I learned doing research was how small Archaeopteryx actually was.  The fossils we’ve found are only about the size of a modern Raven.  The biggest model we’ve found was only 20 inches long.  Scientists are pretty sure all the birds we’ve found weren’t full-grown (don’t ask me how they know), so the adults might have been a bit bigger, but that’s a lot smaller than I had pictured.

The other big surprise was Archaeopteryx’s coloring.  We all know that all dinosaurs and other extinct creatures are stone colored now with no way for us to find out their original color.  But it turns out that we DO know the color of this little guy pretty accurately.  The most famous fossil Archaeopteryx is the ‘Berlin specimen’ and they just published studies of one of its feathers under a microscope.  It has the same structure that produces modern black feathers.  Now that is NOT how I’ve seen them colored in any of the books I’ve seen!

One of the reasons Evolutionists are so excited about the Archaeopteryx is that it had teeth in its beak.  I just read a book from the library in town that described the Archaeopteryx as “primitive” because it still had teeth.  I don’t know about you, but I don’t think I’m more primitive because I haven’t lost my (grown up) teeth yet!  This would have made it easier for the Archaeopteryx to snag fish or whatever else it liked to eat for lunch. (For more extinct birds with teeth see this news article from Answers in Genesis)

Another interesting thing about Archaeopteryx is that its backbone continued on into its tail like the Penguin (bet you didn’t know that, I sure didn’t).  Archaeopteryx didn’t have a “keel” on its breastbone (whatever that means), which is similar to the breastbone of the weak-flying Hoatzin of South America.  It also had long feathers on its legs, large wings similar to pheasants who have to fly around trees, and a strong wishbone.  The jury is still out on whether Archaeopteryx was a strong flier, but it was certainly well designed for long glides!

The last thing that Evolutionists point out about Archaeopteryx to ‘prove’ that it developed from dinosaurs is large claws on its wings.  You can see the impression of them clearly in the Berlin Specimen.  The tips are in the center of those white circles.  Turns out Ostriches have these claws too, and theirs are even more ‘reptile-like’ than Archaeopteryx’s.

If you look at the first picture of Archaeopteryx sideways, you will notice right away that this is not a normal position for a bird to be in.  But in the fossil record it is seen all the time.  Most of the intact dinosaurs are also found with their necks bent WAY back like this poor little dude.  Here’s a quote from Answers in Genesis: “This position is so common in both large and small dinosaurs it has a name: the opisthotonic death posture.”  They did some studies to see if today’s animals can be made to bend their necks back too.  They tried leaving dead chickens out for a month, but that just made a mess.  Turns out birds will still do this if their dead bodies are dunked in (you’ll never guess) cool water!

And God created… every winged fowl after his kind: and God saw that it was good. Genesis 1:21

There are 4 comments Join the conversation