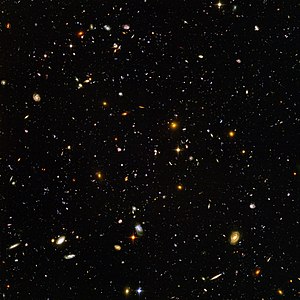 And God said, Let there be lights in the firmament of the heaven to divide the day from the night; and let them be for signs, and for seasons, and for days, and years:

And let them be for lights in the firmament of the heaven to give light upon the earth: and it was so.

And God set them in the firmament of the heaven to give light upon the earth,

And to rule over the day and over the night, and to divide the light from the darkness: and God saw that it was good.

And the evening and the morning were the fourth day. Genesis 1:14-19

This passage is one of the most mind-blowing of all the things God ever tells us. Every time we invent a better telescope, we find the universe is bigger and has more stuff in it than we could have dreamed! 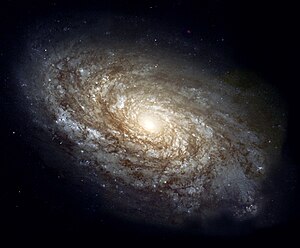 Galaxies are so large that stars can be considered particles next to them (Photo credit: Wikipedia)

Many people have found what God tells us here too hard to accept. How could such a huge space be filled in just one day? Surely it had to take billions of years since we can see billions of light years into space!

There are answers to this problem, but at some point it all comes down to one thing: are you going to trust people and what your eyes can see, or God? Will you choose to believe what we can imagine is the limit of what is possible? Or will you admit God is way bigger, smarter, and more powerful than you can picture?

This week, the Bible Science Guy started a series about a 12 year old who was able to stump one of our up-and-coming Creation apologists (no, he doesn’t say “sorry” all the time; he explains why believing in God the Creator makes sense). One of the things you’ll notice right away is how much faith the young man puts in his own ability to think and understand.

After we have decided God is smarter than we are, then we can start to see all kinds of reasons why what He says makes sense. My favorite post of all shows you where God told us the basic way He made such a huge universe in a tiny bit of time. I’m working on a post telling what we really know about stars forming today. But none of this will convince someone who won’t let God be smarter than they are.

Today’s Creationists aren’t the only ones who know the size and age of the universe is one of the most important places to trust God. God himself uses it to remind people He is smarter than people are:

For as the heavens are higher than the earth, so are my ways higher than your ways, and my thoughts than your thoughts. Isaiah 55:9

And, kids, you are in a much better place than most grown ups on this. Most of you aren’t as full of yourself as the guy in the video; his father’s been carefully training him to be that proud since 2009!

So anyone who becomes as humble as this little child is the greatest in the Kingdom of Heaven. Matthew 18:4