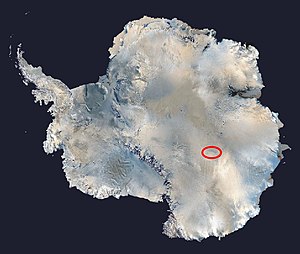 (I fired off an e-mail to Ask-a-Scientist about the formula they use to decide how old really-squashed, deep ice “should” be, but they didn’t know either. In fact, the only website they found talking about it was mine! I think there are very few people who are aware of how they came up with the formula and they like it that way.)

So, that’s still a mystery…

Next, I wanted to know why there was such a giant lake under Antarctica.  Turns out this was the right time to go searching!

Lake Vostok is one of the largest freshwater lakes in the world.  It is about the size of Lake Ontario and can be as deep as 3,000ft [914m]. Although Lake Vostok is the largest and best known of Antarctica’s lakes, it has a lot of company.  We’ve found at least 144 other lakes under the ice cap down there!

People are desperately hoping to find tiny lifeforms living deep in the darkness of the lake’s waters. Russia has been drilling down toward the water for some time. Last February (end of Summer), they got down to the liquid water level and then pulled the drill back so water would wash up and keep the lake (if that’s what they really hit) clean.

Now they’ve gone back and drilled out some of the refrozen water to study it for life. A report come out yesterday saying there might have been one tiny bacteria thingy, but probably just microbes that we know live in the ice layers above the lake.  So, no biggy there.

What they’re really hoping to find is life forms that could survive on other planets.  But, even if they do find some amazing little guys who can survive in a deep Earth-lake, that doesn’t come close to proving aliens!

[edit: They have found microbes down there, but many think they’re contaminants. How can they be sure? Does it even matter?] 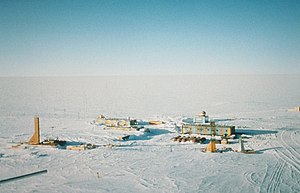 Something fascinating about Lake Vostok is that the surface of the ice above it (where the poor scientists are stuck) is up at 3.5 km [11,484ft) above sea level.  Vostok Station is where they’ve recorded the coldest temperature ever on earth (-128.6F [-89.2 C]).

Anyway, what I wanted to know is, how did we get so much liquid water under all that ice?  I’ve found a couple of interesting things:

To learn more about Lake Vostok check out this flash animation from the Earth Institute of Columbia University (after you read my posts on how they get the 400,000 years idea).  One of the interesting things this animation presents is that they believe the ice cap over Antarctica is all moving.  That is why they think the ice dates back 400,000 years but believe Lake Vostok hasn’t been contaminated in 15+ million years.

The lake is continually losing water as ice just above it.  We know this because the ice right over the lake seems to be made of lake water rather than “annual layers”.  But the longest they figure it takes for the lake water to completely exchange is only 13,000 years.  This means that for scientists “the sources of replacement water remain a mystery.”

BTW back in 1996 they claimed the water had been there a million years.  Times change!

I don’t know how all these things actually work out, but if you thought scientists had all the answers, you’ve got another think coming.  Maybe you can be one of those brave souls down there in a few more years!

“Does ice have a mother?
Who gives birth to the frost?

That’s when the water freezes as hard as a rock.
Even the deep sea freezes over!” Job 38:29,30 Easy-to-read Version

How did Freshwater Creatures Survive the Flood Part 2

So, now we know that water sorts itself much like oil does on other layers of water allowing fish to survive in pockets of less salty and warmer/cooler water. What about the built-in way a fish’s Read more…

How did Freshwater Creatures survive the Flood? Part 1

The Flood of Noah’s Day practically destroyed the surface of the whole earth God knew if Noah didn’t build an ark, every land animal would have gone extinct. But what about the animals that couldn’t Read more…