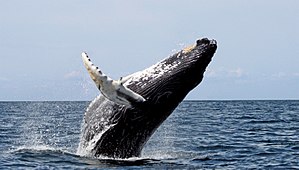 It appears that Creation Ministries International didn’t include the full picture in it’s article that whales float around until they decompose. It’s not a lie (that whale really was floating around), but there’s a lot more to the story.

The photos and video are kind of gross, but if you have a search online you can find lots of evidence that whales do sink to the bottom while still in one piece. In fact, their carcasses support a whole ecosystem that eventually devours everything!

Recently, scientists have been studying these strange, disgusting but important members of the ocean community.There up to 190 species of worm, bacteria and mollusk that make a living cleaning these messes up.

I did notice that although whales do fall to the bottom on their own, in order to find and study them, the scientists weighed down beached whales carcasses with “up to 3,000 kilograms [6,600 lb] of scrap metal” to get them to sink in a known location.

Some of the new and interesting creatures that have been found on these bones are worms called Osedax [bone eaters] that can’t eat the bones themselves, but work together with special bacteria to get the fatty food out of them.  The Institute for Creation Research has an article on them: No Time for Bone-eating Worm to Evolve.

I haven’t been able to find how much bone is left when these scavengers are finished, but I did find out a few things to think about:

Sometimes, these fossils show more signs of scavenging on the upper parts that would have been above the sediment than underneath. So, for fossils to form while scavengers are still attached, you have to have something happen pretty quickly or they wouldn’t have been frozen in place like that. I found a scientific paper that mentions 4 places around the world with fossils like these (in Washington State, Louisiana, and in Spain).

Interestingly, even in the fossil record, the Osedax worms are always found with whale bones. They have always lived with their favorite food.

But, are these examples of obviously dead and later buried whale bones the only kind we find in the fossil record?

I mentioned the whales found in Peru yesterday. These fossils do not show the kind of breakdown seen today. There’s a great scientific paper detailing what scientists found:

In English this means most of these whales where buried while their bones were in the life position. They hadn’t been moved around much after death.

We don’t have a problem with life and death having continued for years before the Flood (let’s see, over 1,600 years in fact!). Its nice to know that some of the creatures preserved in the fossil record did get to live out their natural lives before being buried (although the scavengers didn’t).

But, how do you explain the rest of the fossils like in Peru with everyday processes? Geology requires some very extraordinary things to happen to make sense if it all. How ’bout a world-wide flood!

And God created great whales, and every living creature that moveth, which the waters brought forth abundantly, after their kind, and every winged fowl after his kind: and God saw that it was good. Genesis 1:21

Audubon Magazine:  “It isn’t clear where the bacteria come from: Osedax don’t have them as larvae or seem to inherit them from their parents. “They’re somehow getting them from the environment, but we haven’t found them in the environment yet,” says Johnson. “They’re out there somewhere.””