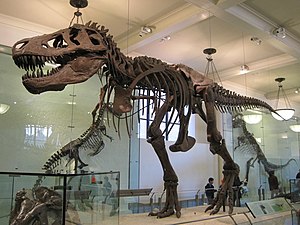 There have been two events that have made the greatest impact on our understanding of geology in the last 40 years or so.  One was the eruption of Mount St Helens with its catastrophic effects on the land and forests nearby beginning in 1980.  The second was far smaller and happened quietly in the wilderness and in the laboratory.  I’m talking about:

The finding of fresh tissue in “millions of years old” fossils

Several years ago, I got one of my first issues of the free Acts & Facts Magazine.  They had a short, one page article on a new finding about dinosaur bones.  Turned out, going against what Evolutionists must believe, some scientists had broken open a dinosaur’s bone and taken samples to the lab.  To their astonishment they found soft, stretchy tissue and even blood vessels and cells!

Since then, I have found out more about Mary Schweitzer who was the first to examine these samples and what she thought about it.  Back in 2005 there were a number of articles about her findings.  If you read them you might notice what they DIDN’T write; although they had to tell about what was found, they almost never explained what soft tissue does to the “millions of years” theory.  That’s because even Schweitzer can’t explain how such stuff could survive for even close to one million years!

For a while scientists tried to explain these findings away as poor science.  They even wrote papers claiming that what had been found was actually a “bacteria sludge” or as modern contamination.  But in 2008, Ms. Schweitzer published more careful evidence showing that there was no error, this was the dino’s own DNA and certainly not a contaminant.  Since then, a number of other fossils have been shown to still have soft tissue, proteins and even dried up squid ink! There’s no escaping the fact that there is still soft tissue to be found in the fossil record.

I was very pleased to run into a long, detailed article by Discover Magazine on Mary Schweitzer and the path that led to the discovery of the first soft tissue finds.  Although she is a theistic Evolutionist, Ms. Schweitzer is brave enough to admit that she is a believer in Jesus.  This tells you a lot about her, since the scientific community isn’t very kind to Bible believers.

That article also had some great info on how the first sample made its way to her lab.  Mary Schweitzer had been working with John Horner (of birds=dinos fame) since the 1990s.  While helping on another dig, she noticed that the dino bones stank like a cadavor she had once worked with!  The other workers told her that this happened all the time.  Turns out, the report of 2005 wasn’t the first time fresh cells had been found in a fossil.  Back in ’97 Ms. Schweitzer had published a report on blood cells from another T. Rex bone.  It just didn’t get much coverage (for some reason).

Then in 2000, Horner’s crew noticed a T. Rex foot sticking out of a small cliff in the remote area of Montana they work in.  When they had finished digging everything out and covering the bones with plaster, the whole collection weighed 3,000lb [1315kg] and was too heavy for the helicopter they were using to remove them all.  Because of this, they decided to break one of the femurs.  A few fragments broke off when this happened and they shipped them to Schweitzer’s lab for her to study.  The rest is history!

I tried to find a webpage for kids that would discuss these findings.  I wonder why I couldn’t find any (except for at Answers in Genesis)?  I did run into a Theistic Evolutionary webpage explaining the T. Rex tissue away.  Unfortunately, they wrote their article in 2005, so one of their main arguments is that if the fossils were made by the Flood less than 5,000 years ago we should find a lot more fresh tissue than we do.  They also make the case that one should only trust scientists who don’t let you know what Worldview they hold.  Why that should make someone’s evidence more trustworthy is beyond me.

One last thing, the 2005 sample of T. Rex tissue showed that it had a special kind of bone tissue that mother birds develop when they are about to lay eggs.  This is really cool to find out, and fed right into the popular idea that dinosaurs Evolved into birds (for a similar storyline, see this article on the Evolution of Pottery).  I’ve also shown what we actually know about Feathered Dinosaurs.   To see how dinos and birds match up, you could read this long article from Dr. Menton of Answers in Genesis.

Everyone will enjoy this video of That’s a Fact- Dino Cells!

Keep up with all the latest findings on Real Science Radio’s soft tissue page.

There’s a bone sniffing dog in Australia who’s found some fossils by scent: ICR: Can This Dog Sniff Out Fossils?

Let no man deceive himself. If any man among you seems to be wise in this world, let him become a fool, that he may be wise. For the wisdom of this world is foolishness with God. For it is written, He takes the wise in their own craftiness.  And again, The Lord knows the thoughts of the wise, that they are vain. 1Co 3:18-20

Rejoice in the Lord always; again I will say, rejoice! Let your gentle spirit be known to all men... Philippians 4:4-5 "Cone flowers photo and Bible verse"

Rejoice in the Lord always; again I will say, rejoice! Let your gentle spirit be known to all men... Philippians 4:4-5 "Cone flowers photo and Bible verse"