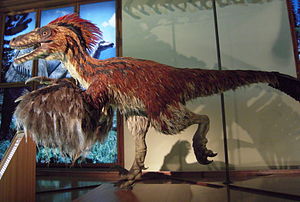 The other day I went to the kids’ section of my local library and borrowed a book on feathered dinosaurs so I could tell you all about them.  As I pointed out on Friday, I was quite disturbed by the author’s use of absolute language to describe things that no one now could possibly know just by looking at animal remains in the rocks.  So let’s see how what the book says and what we actually do know match up.

The first dino in the book is called the “Bambiraptor.”  Yes, that is Bambi as in the movie deer!  It was found by a kid out in Montana, which is very cool.  Maybe you can talk your family into going out there for your next vacation!!  Now, my book uses this one as their poster-child of the feathered dinosaurs.  But if you look at the Wikipedia page about this critter, it wasn’t found with feathers at all.

Turns out that most of the feathered dinosaurs that they like to use have only been found with “filamentous integument.”  Now that phrase led me on a merry search to find out what those words mean.  Here’s the definition from biology online: filamentous and integument.  All right, what does this mean?  It means what they actually see on the edges of these dinosaurs are long, stringy things that could have originally been part of the surface of the skin.  There is no way you could get from these fibers to feathers unless you needed them to be there.  John MacKay talks about what is actually going on HERE.

This phrase from the Wikipedia page on feathered dinosaurs is especially telling, “The dromaeosaurids Rahonavis and Velociraptor have both been found with quill knobs, showing that these forms had feathers despite no impressions having been found.”  And they want to say we are the only ones who live by faith.

Here are some more of the featured creatures in my book on feathered dinosaurs.  Mononykus (I don’t have to add a thing, just read the Wikipedia article), Beipiaosaurus (have a look at what they actually found by reading about the EBFFs), Troodon, Sinosauropteryx (All described specimens of Sinosauropteryx preserve integumentary structures (filaments arising from the skin) which most palaeontologists interpret as very primitive feathers.), and Deinonychus (Because of its extremely bird-like anatomy and close relationship to other dromaeosaurids, paleontologists hypothesize that Deinonychus was probably covered in feathers.).

This stuff is really highly disappointing.  I was expecting them to be able to better than this.  But wait, I skipped over a couple of examples! 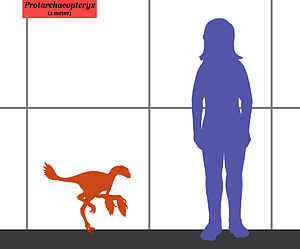 Protarchaeopteryx and Microraptor are the last two examples in the book.  Is this really all we have to go on about Protarchaeopteryx?  I have to include this page just for this quote, “A good example is Protarchaeopteryx, which translates as “before Archaeopteryx,” even though this birdlike dinosaur lived tens of millions of years after its more famous ancestor.” Huh??  Have a look at this Evolution News article.  They haven’t even manage to keep a lid on their own people to tow the party line of “dinosaurs turned into birds.”

As for Microraptor, have a look at this quote from Wikipedia, “In the December 6, 2011 issue of Proceedings of the National Academy of Sciences, Jingmai O’Connor and coauthors described a Microraptor specimen containing bird bones in its abdomen, specifically a partial wing and feet. Their position indicate that the dinosaur swallowed a tree-perching bird whole.”  So much for it being a bird’s ancestor.  I’ve spent several hours reading everything Wikipedia has to say about these animals as well as searching around on the internet.  I haven’t run into any explanation for their belief that these two true-feathered critters must be reptiles and cannot be birds.  They just state it without any evidence to back their claim.

I also ran into an interesting article about the position Microraptor had to hold its wings in to keep from damaging its feathers. But that doesn’t say anything about what class of animals it belongs to.  If they can’t even prove that Protarchaeopteryx and Microraptor aren’t birds, there is no reason to cave in to what they tell us to believe, which is that these were sort-of dinosaur, sort-of bird things.

Institute in Creation Research has a short article on Microraptor. I did run into a blog article trying to refute their article, which rightly pointed out that it’s not necessary for an animal to fly in order to catch a bird to eat. I hope ICR will be careful on their side, too!

Searching around I ran into this little guy, the Shuvuuia which wasn’t covered in the kids’ book.  Have a look at their line of reasoning proving that the vague fossil impressions found must be feathers, “The type specimen of Shuvuuia was found surrounded by small, hollow, tube-like structures resembling the rachis (central vane) of modern bird feathers. Though highly deteriorated and poorly preserved, biochemical analyses later showed that these structures contain decay products of the protein beta-keratin, and more significantly, the absence of alpha-keratin. While beta-keratin is found in all integumentary (skin and feather) cells of reptiles and birds, only bird feathers completely lack alpha-keratin. These findings show that, though poorly preserved, Shuvuuia likely possessed a coat of feathers.”

In English this means, “The tube-thingys we see don’t show alpha-keratin.  Bird feathers don’t have alpha-keratin either.  Therefore, this dinosaur must have had bird feathers.” Sure, and I bet they can prove any number of things with that easy a process, too.

Is this the way the information we actually have is presented in the book for kids?  Not a chance!  They did do kids the favor of using the fuzzy words, “probably were feathers” and “may have had simple feathers” on some of the pages, but the rest of the book states its author’s assumptions as facts.  “Sinosauropteryx was covered from head to tail in fine, fuzzy down” and “Beipiaosaurus was a big feathered dinosaur” are stated without any indication of the guesswork involved.  Of course, the pictures on every page are the classic way to show kids that these claims are verifiable.  They don’t show the fossils we actually have to work with, just CG created still-shots, complete with proper plant and prey backgrounds to increase the believability.

We know there were some really cool animals in the past.  We can all share them and enjoy them.  Why lie to us unless you have an agenda that you can’t fulfil in any other way?

Lots of news about feathered dinosaurs covered by Answers in Genesis:

Did All Dinosaurs Have Feathers?

And an article on the subject from AiG:

Did Dinosaurs turn into Birds? by David Menton

Love your site!!!! Keep up your excellent work!!!

Have you checked out ICR’s latest book on Dinosaurs. “Guide to Dinosaurs” is available from the ICR store. I think you will be pleased.

Can’t wait for fall and to start up again with Jk for science. We are going to make the full year Creation Science with stops along the way to study things like this. Thanks for posting it!

Wow, this should be a fun year for you two! It’s been a great pleasure and I hope God let’s me keep it up for a long time. 🙂

I hope so too!

So little time, but I shared your articles with my grandchildren and will continue to do so! You are awesome!