Continued from The Biggest Wrinkles Ever: Folded Mountains

We know that there are 4 kinds of mountains:

This week we’re learning about this fourth type: Fold Mountains. Not only are these whole ranges folded, but many of them have some amazing folded rocks in them. I saw some of these enormous folds while visiting the Rockies around Grand Cache, Alberta. Unfortunately, I didn’t have a good camera with me to show you pictures, but you can have a look on a search engine and view some spectacular photos.

How do you get huge sheets of rock to fold up like this without breaking them in pieces?  Turns out rocks don’t always break when they are being forced to change direction.  I had to search and search to find these things out, but it turned out that the page above mentions all 5 of the commonly taught causes for rocks to bend without breaking (called fracturing).

But the rocks I’m talking about weren’t down deep, they were near the surface when they were pushed together. 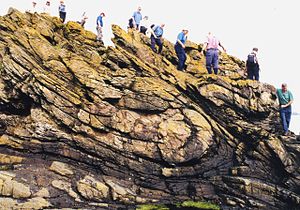 Folded rocks near Collieston. This is a splendid example of a tight recumbent fold, showing the forces which deformed these rocks during the Caledonian mountain building 400 million years ago. (Photo credit: Wikipedia)

Then the Tulane geology page said the Uniformitarians’ favorite cause with confusing words.  I found a clearer example of this explanation on a science for 3-6th Graders page, “High temperatures and slow deformation rates favor ductile behavior, while low temperature and fast deformation rates lead to brittle behavior.”  In other words,

To find out how slowly they are expecting the rocks to be able to bend without breaking I had to do even more searching.  I found the answer in a really long PDF that would make great geology reading when you get to be a Senior.  Here’s what they say, “Like faults, folds form slowly over millions of years, as rock layers gradually yield to differential stress and bend.”
Ah, ha, so that’s how they explain these things! Just give the rocks a dose of unobservable time and you’ve cleared up all your problems with folded rocks.  No one can possibly prove them wrong for the next 10,000,000 years or so!

Exposed rock layers in Iran as seen from the International Space Station (for scale, that dark S shape is a lake)

Now for reason #5 (which was rather hard to find on the non-Creationist web, so listen close).  Rocks can bend rather than break when they are… full of water.  Now, when would we have had a lot of water-soaked rocks being pushed together and forced up?  I ran into an Old Earth Creationist site that said this idea of folded rocks being proof of the flood is nonsense because of the other ways to get them slowly.  They mentioned an unnamed chemical “solution” that would make rocks more bendable, but the only chemical I can find that does this is water!

Well, it looks like we’re back to what Answers in Genesis and the rest have been saying for years.  Water and soft, young rocks can fold.  Old rocks folding over millions of years?  That takes as much faith as it does to believe what Noah recorded.

Which removes the mountains, and they know not: which overturns them in His anger. Job 9:5

Behold, He withholds the waters, and they dry up: also He sends them out, and they overturn the earth.  Job 12:15

He puts forth His hand upon the rock; He overturns the mountains by the roots.”  Job 28:9

These are the main verses talked about in ICR’s Great Turnovers! article.

Don’t miss my Quotes for the Day!

Answers in Genesis: Rock Layers Folded not FracturedCreation Ministries International: Should atheists be free to teach what they believe?; and Folding Solid Rocks  This one is great with an account of a tree fossil upright through folded layers!

Institute for Creation Research: technical PDF of Tight Fold and Clastic Dikes.  If you take a minute to read the “abstract” you will see that Uniformitarians must believe that sandstone remained soft for millions of years before being bent.

Barry, something to muse about… Radiometric dating is based on assumptions that are open to question, eg t=0 composition, open vs closed system, etc. Rocks have no date stamp on the bottom and neither do fossils… but rock strata are used to date fossils and index fossils ard used to date strata wbich is very circular. But we have a globe 70% covered by water, 3 miles of strata laid down by moving water that can be traced in many cases to other continents. Bottom line… if a catostrophic world wide flood happened, it reset the history of the rock record.destroyiing the accepted strata and fossil time scale since all the layers and fossil burial took place within the 100 years of tbat flood. The law of non-contradiction says both can not be true.

Thanks for the info. Very interesting and just what I was looking for. My only problem with this page is the reference under the rock formation near Collieston stating that it was formed “400 million years ago”.

LOL! I should have left the “source: wikipedia” with that picture. Thanks for the heads up. 🙂

I understand that world views are difficult to change but just so you know, the geologic timeline has many ways of being established – all of which present similar ages. In spite of your confidence in bible timelines, evidence collected world wide shows an earth 4.55 billion years old and macroscopic (large enough to see) life at about 600 million years ago. I don’t expect you to accept what I am telling you, but this is easily demonstrated.

Hello, Barry. One would hope a thought-out worldview wouldn’t be easy to change, that is, unless you recognized serious flaws in the one you’d been following and were hoping to find a more satisfying one.
My question for you is, why do you think telling me your evidence from around the world “shows an earth 4.55 billion years old” is “easily dmonstrated”, but giving me no specifics is going to ispire me to throw off my worldview?
Are you aware that radiometric dates are rejected when they give dates older than 4.55 billion years old? Do you know you can’t even get an estimated date for a rock unless you first tell the lab how old you think it is so they can toss out the too far off dates? Why would you expect me to cast away the eye-witness testimony of the Creator God for man’s putty-like ideas?
I can give you the names of several people who rejected an old earth as they studied rocks. They were “open-minded” before, but the more they learned, the more unconvinced they were by scientists’ claims. No one has ever proved God’s Word wrong, nor will they. People claiming to speak for God, sure, but God, never!
Here’s a taste of what I’m talking about: http://kgov.com/nuclear-chemist-comments-on-stephen-meyer-claim-about-radiometric-dating-in-darwins-doubt