Usually fossilized bones are found scattered across a wide area, like Dracorex’s.  Sometimes they are even buried with a whole bunch of other bits mixed together in a “bone bed” (we creationists like to call them “grave yards“). But sometimes we find a whole creature in one piece, much like a pressed flower.

When I wrote about Archeopteryx, I mentioned the way the fossil is positioned with its neck arched WAY back.  One of the things I learned is that this quite common when a dino or bird is fossilized in one piece.  The term opisthotonic [oh-pis-thoh–tohn–ik there’s a 2nd way, but I can’t say it] death posture describes this extreme neck (and tail) arching. 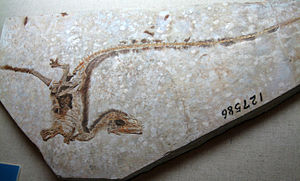 Scientists have a lot of fun trying to figure out why these animals were buried like that.  They like to argue about whether it happened before or after death, or even from water (water now!) swishing the corpses into that position before burial.

You can read about the discussion for yourself on this slightly eye-crossing science paper.  The paper’s conclusion seems to be that the animals found this way all use a lot of oxygen, so they probably got some sort of disease that messes with oxygen. It’s a guess, but is that the most likely reason, or do they just want to get far away from a flood?

In fact, all of those ideas are just guesses until you find a way to get a modern day animal to do the same thing on its own. 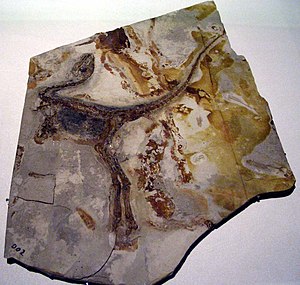 Many chickens had to die to give us these results, but here is a study from Brigham Young U. that actually tried their guesses out (BTW that is real science).

I could hardly believe my eyes when I read the first sentence of the article:

“Recreating the spectacular pose many dinosaurs adopted in death might involve following the simplest of instructions: just add water.”

It’s a wonder they didn’t lose their job letting the cat out of the bag like that.  We’re supposed to think fossils form everyday; why, some of us might just fossilize in a few million years. But we’re not supposed to picture watery catastrophes!

Here’s what they did.  First, the scientists put already killed chickens on a bed of sand for 3 months to see if they would bend backwards.  Nothing but gross, rotten chickens.

Then they tried water:

“When seven other chickens were placed into cool, fresh water, however, their necks arched and their heads were thrown back within seconds. Sustained immersion of the birds for up to a month slightly increased the severity of the pose, but the major movement of the head occurred almost immediately.”

Did you catch that?  “Within seconds,” not days, months, or millions of years.  Seconds!

If we had looked for evidence of water being involved in these creatures’ burial, we couldn’t have found anything better.

The article closes with a comparison study that did not find the same results.  Back in 2007 a group had dunked dead quails in salt water and they didn’t bend up.  Nobody knows if the salt, temperature or something else gave such different results.

Maybe you can talk your parents into dunking your Thanksgiving turkey in different waters before it gets cooked so you can check it out for yourself!  But you would need the neck still attached…

They said, “‘Welcome! God bless the king who comes in the name of the Lord.’

Peace in heaven and glory to God!”

Some of the Pharisees said to Jesus, “Teacher, tell your followers not to say these things.”

But Jesus answered, “I tell you, if my followers didn’t say them, these stones would shout them.”  Luke 19:38-40 Easy-to-read Version

I found out about the Canadian bone beds at Creation Research