At harvest time, Cain brought a gift to the LORD. He brought some of the food that he grew from the ground, but Abel brought some animals from his flock. He chose some of his best sheep and brought the best parts from them.

The LORD accepted Abel and his gift. But he did not accept Cain and his offering. Cain was sad because of this, and he became very angry. The LORD asked Cain, “Why are you angry? Why does your face look sad? You know that if you do what is right, I will accept you. But if you don’t, sin is ready to attack you. That sin will want to control you, but you must control it.”  Genesis 4:3-7 Easy-to-read Version

There is one last area of God’s character that people will use to prove that God is mean: He likes some people and not others.

Like every other main thing we can learn about God in the Bible, this idea comes up early in Genesis.  The very first boys ever born got different reactions from God.  The question is, why did God like one and not the other?  Was it something that Cain and Abel couldn’t change?

I’ve already written on the reason God liked having a sheep sacrificed better than farm goods.  The story tells us that God promised Cain that He would accept him if he did what was right.  Cain wasn’t doomed to be hated by God for no reason; he was given a choice.  He could turn to follow God and worship Him in the way God wanted, or he would end up obeying sin.

We know which choice Cain made and the sad fate his family suffered for it. 🙁

Here are some more people God chose as favorites:

But Noah pleased the LORD. This is the history of Noah’s family. He was a good man all his life, and he always followed God. Noah had three sons: Shem, Ham, and Japheth.  When God looked at the earth, he saw that people had ruined it. Violence was everywhere, and it had ruined their life on earth.  So God said to Noah, “Everyone has filled the earth with anger and violence. So I will destroy all living things. I will remove them from the earth. Use cypress wood and build a boat for yourself. Make rooms in the boat and cover it with tar inside and out.  Genesis 6:8,14 EtrV

Like yesterday’s post, this won’t be used by those who hate God because they won’t admit this event is true.   But, did God choose Noah for no good reason?  The Bible doesn’t say that!

This next one is the one they really hate (maybe because this is what Satan really hates): 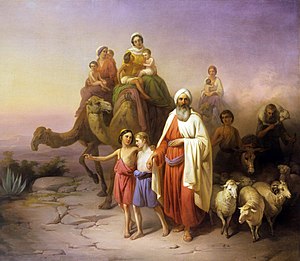 And the LORD said, Shall I hide from Abraham that thing which I do; seeing that Abraham shall surely become a great and mighty nation, and all the nations of the earth shall be blessed in him?
For I know him, that he will command his children and his household after him, and they shall keep the way of the LORD, to do justice and judgment; that the LORD may bring upon Abraham that which he hath spoken of him.  Genesis 18:17-19 KJV

This shows the full meaning of the Scriptures that say, “Abraham believed God, and because of this faith he was accepted as one who is right with God.” Abraham was called “God’s friend.”  James 2:23 EtrV

Their thinking is that God, in order to be the kind of god they will worship, must be “fair” to everyone.  he/she/it must treat all people the same.  I suppose they want the government and schools and jobs to do the same thing.  We have had some governments that claimed to do that: they were called Communists.

The God Who Is doesn’t do things that way.  He likes people who love, honor and obey Him.  He is displeased with people who follow their own way and ignore Him.

Praise the Lord, He also did something far greater to show some people special favor:

Yes, God loved the world so much that he gave his only Son, so that everyone who believes in him would not be lost but have eternal life.  John 3:16 EtrV

Notice that there is still a precondition for God to give you eternal life: you have to believe Jesus or you’re sunk.

So, what do we do with  verses like this one:

This is a great verse because it shows things from God’s perspective rather than ours.  Everyone of us is doomed by our own sin, it is God’s mercy that spares any of us.  If we desire God’s mercy and are willing to submit to His will, He will accept us.  If God “hardens” our hearts, we won’t want His mercy and will refuse His will.

Uncomfortable, but simple stuff, isn’t it!

But the Scripture imprisoned everything under sin, so that the promise by faith in Jesus Christ might be given to those who believe.  Galatians 3:22 ESV

Don’t judge me, your servant.
No one alive could be judged innocent by your standards.  Psalm 143:2 EtrV