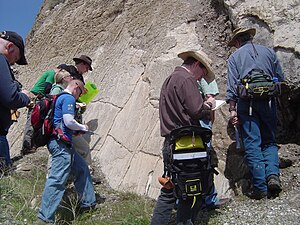 Ever since I was a girl, geology was always my favorite subject. It’s also one of the favorite subjects of a number of Creation Scientists. Why? Because the rocks are full of signs about earth’s past!

One of the best places to learn about geology from someone who sees evidence for the World-Wide Flood everywhere is Tas Walker’s Biblical Geology. He’s kept a blog of shorter articles for years, so even though he doesn’t post often, there’s lots to check out.

Today I want to show you one of the coolest things I’ve learned from his site.

Google Earth can help you picture the last few stages of the Flood! In fact, if you plug “google earth” into his search box, you get pages of posts where he’s used this tool to point out different things.

The reason this tool is so exciting is because you can plug in an elevation (height above sea level) and see what the landscape would look like with water up to that point. Walker is from Australia and he uses the international measure of meters, but once you keep that straight it’s not hard.

All the articles are fun (although some of the words he uses are tough), but there was one that blew my mind:

See what he says about what happens when you plug in 80 meters (262 ft) asl (above sea level):

It seems that 80m is globally significant in many places….

Others in the oil industry have noticed that 80m worldwide marks the boundaries of a lot of oil-rich provinces. Does that mean that there is oil around Sydney? Indeed, the lower Sydney formations do contain oil and gas.

Did you know that? I sure didn’t. Does this mean most of the oil resources we have are from near sea level? Well, let’s think about it. Where does most of our oil come from? There are sea based oil platforms. They sure are below sea level! Then there’s the major oil fields of the Middle East, Texas, Venezuela, Alaska, and Russia. Guess where most of them are: down by sea level.

Does this mean if there’s a place with oil above 80 meters it proves the Flood false? Of course, not. We know the ground got pushed up tremendously by the movement of the earth. But the fact that most oil is from down low is interesting.

It would be fun to study this out more. Unfortunately, I don’t have the first clue about Google Earth, or time to learn to use it, but I bet you could talk your parents into letting you play around with this if you behave. It could even make a great Science Fair project!

One of my colleagues commented on the sharpness of the escarpments, gaps and gorges in these images. The fact that they are so crisp and sharp and that we can easily trace the drainage flows means that the landscape is not very old. If it was exposed to tens of millions of years of erosion the features would be smoothed and not sharp.

We have nothing to fear from science. The more we study our planet, the more clearly we can see God’s hand in everything!

And every creature which is in heaven, and on the earth, and under the earth, and such as are in the sea, and all that are in them, heard I saying, Blessing, and honour, and glory, and power, be unto him that sitteth upon the throne, and unto the Lamb for ever and ever. Revelation 5:13

My pleasure. I’ve got it on my “favorites” page, but no one ever reads it. 🙁
So when I remembered reading about a particular elevation showing interesting features, I decided to do a post. It would get *me* more interested! 😀