I first heard of the Hoatzin [pronounced hoh-at-sin] Bird when I was studying for my post on Archaeopteryx a couple of months ago.  It’s kind of strange to have a bird so well known in one country that they chose it for their national bird, and yet it’s so unknown in other places!

Hoatzins live in the northern part of South America wherever there is quiet, swampy water and lots of trees around for them to build their nests in and eat from.  They grow to about 65 cm (25.6″) long and weigh less than 1kg (2.2lb).  Which makes them just longer than Archaeopteryx.

Only pictures can describe what this bird looks like for you.  Their bright colors and crests make them attractive from a distance.  The moms look almost like dads, just a bit smaller with shorter head crests. But if you go visit them, their calls could be described as “a heavy smoker’s wheezing,” and you might want to bring a nose plug with you! 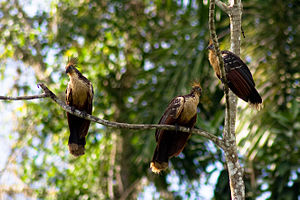 Hoatzins are vegetarians, feeding on lots of leaves, with some fruit and flowers for dessert.  They have a specialized crop (the first section of the food canal) that has two folds to digest all the fiber in the leaves, much like what cows and sheep do with their first stomachs.  This is slow but efficient and lets the Hoatzin eat a lot of plants that other birds can’t.  They also don’t have to fly around all day trying to get enough food.  Of course, like the Sloth, the Hoatzin doesn’t have enough energy to stay busy all day, either.  They gather and eat food for about half an hour, morning and evening.  They spend the rest of the day sitting on a branch looking around and leaning forward on a special spot God gave them on their breastbone.

The Hoatzin can release disgusting smells (ever been to a cow farm?) from their crop when they sense danger. This smelly habit is a blessing to the Hoatzin because only very hungry creatures are interested in such a meal.  Because of this, the Hoatzin isn’t in great danger of going extinct, although people need to be careful to leave enough of their favorite waterside trees for them to nest in.

Adult Hoatzins aren’t very strong fliers.  Their bodies are heavy with all that food, and their flight muscles are weak.  When parent Hoatzins see a dangerous hawk or other predator coming, they will crash-land in nearby bushes, trying to distract attention from their chicks.  God has also provided baby Hoatzins with some very special tools to help them survive.  Hoatzin nests are almost always built over water, so if they’re spotted, the chicks will jump down and swim to the shore.  When it’s safe, they use claws on their wings to help them ackwardly clamber back up to the nest.

Hoatzin chicks grow so quickly that they can only climb for their first two weeks before they get too heavy.  But, a baby Hoatzin has to take care of itself at three weeks anyway.

Evolutionists Quotes of the Day:

from Last Refuge:  “Unable to decide whether it is truly primitive or just an evolutionary throwback, scientists have shelved the problem and placed the hoatzin, Opisthocomus hoazin, in a family or even an order all by itself.”  Of course it’s “primitive,” so are we!  Figures they would just make a new order rather than face the possibility that the Creator would throw in some puzzles to prove that there is a Designer.

And from Wikipedia:  “It is arguably the most enigmatic living bird in regard to its phylogenetic relationships. No satisfying evolutionary hypothesis has been proposed, and the situation has become worse with the availability of DNA sequence data.”

In English this means, “Hoatzins are a puzzle to those who what to say that all animals developed from other animals.  The more we learn, the less Hoatzins fit into our neat tree of life.”  Evolutionists have spent a lot of time trying to force the Hoatzin to belong to one of the other groups of birds, but nothing works.

Praise the LORD from the earth, ye…. Beasts, and all cattle; creeping things, and flying fowl:

let them praise the name of the LORD: for his name alone is excellent; his glory is above the earth and heaven. Psalm 148:7,10-13

Answers in Genesis has an in depth article on them.

Last Refuge: RELIC OF PREHISTORY? has a first hand story of a guy trying to get pictures of baby hoatzin’s climbing.  Lots of info on nesting and chicks.

Land of Six Peoples: Hoatzin talks about their digestion (and opens with a saying for Sherlock Holmes’ fans)

Reblogged this on Lee's Birdwatching Adventures Plus.