Continued from Part 1 and Part 2

I was going to move right on to the dusty stuff in the ice, but ran into some very interesting University study pages I have to point out.  Columbia opens its mathematical calculation class with an introduction we’re going to look at:

“These annual layers provide a record of the earth’s climate that reaches back as much as 200,000 years.”

What?  I thought they went back 1.4 million years!  That is one giant discrepancy.

Columbia recommended their students check out this U. of Michigan (go Wolverines!) page.  The coolest thing is a cross-section drawing showing a lake (as in unfrozen water) “the size of Lake Ontario” underneath the 4km [13,000ft+] elevation Vostok Ice Station in Antarctica.  That is awesome.  Anyone for a swim?  Oh, yes, the U. of Mich drawing states the ice goes back 420,000 years.  All right, what’s going on?

Have a look at what they say about the squashed bottom ice:

“The… age of the ice… is obtained by counting layers of ice and, when layers are no longer clearly visible, modeling the flow of merged ice layers.”

Wait a minute.  In really squashed ice, “layers are no longer clearly visible?”  I don’t remember the Natural History Museum tell us that.  What is this “modeling,” and is this going to end up being as full of assumptions as radiometric dating is?

I searched nearly an hour for a page that would explain how you figure out a model to calculate “the flow of merged ice layers.”  If any of you know what they’re talking about please leave a comment!

The other, better known way scientists study really deep, squashed ice from an ice field is by looking at the layers of “dust.”  Today we’re going to find out what this dust is and where it came from before settling onto Antarctica or Greenland.

The best page I found on this is a technical paper abstract.  Those are the high-falooting, jargon filled short versions of what the scientists were studying so other scientists can keep up with what they need to know in a few minutes.

They were studying an ice core from Antarctica using a core called EPICA Dome C.  First, they say they’ve been using X-rays to study the dusty ice.  Cool.  Then they go on to their ideas about the climate at different depths of the ice.  I’m with them for one Ice Age, but that would be near the bottom, not where they put it.

Turns out, the stuff blown onto the ice has changed a lot from time to time. A lot of the dust at certain levels has the same ingredients as dirt at the bottom of South America.

At other levels there is dust from lots of different sources.  The study authors are pretty sure some of that mixed dust came from Australia.  I also found a similar study from Greenland saying the dust up there is either local or blown in from East Asian deserts.

But this isn’t the whole story.  When a large volcano erupts with a lot of ash, the tiny particles are carried by the wind to the ice sheets.  Even in recent times, volcanic ash has been suspended in the air around the globe for many months by eruptions like Krakatoa’s in 1883. Another helpful thing is that every volcano spews out different things.  I don’t usually use PBS:NOVA because it is so biased, but they were the clearest on what’s going on: 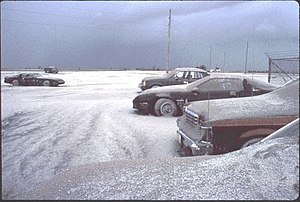 So a really major eruption will leave traces in the ice on all the ice sheets.  Scientists use these layers to check if they are counting at the same rate as other researchers.

BTW, this doesn’t always work.  A moving ice sheet (glacier) in Alaska didn’t have ash from an 803 AD volcanic eruption as expected, leaving scientists to try and figure out why.

What they don’t tell you is that the other records they are comparing with don’t
have dates on them either.  Once we move beyond written history, it is
all guesswork to calculate how old any of these layers are, whether they are ice sheets, ocean floor layers, or anything else.

The LORD is slow to anger, and great in power, and will not at all acquit the wicked: the LORD hath his way in the whirlwind and in the storm, and the clouds are the dust of his feet. Nahum 1:3

So it’s hard to get anything but estimates on the age of the ice. We can clearly not know for certain. Some of these estimates are only “educated” guesswork.

They are clearly incompetent. What is actually a 5 day period they claim is a full year.

How is it that they don’t notice this.. The layers pile up faster than they are able to drill down to those depths. The evidence is there right beneath their feet.

A new layer every 5 days.. How is it possible for them not to notice?

If your job, peace of mind, for that matter, your whole worldview depended on you seeing a year per layer, you’d do it too. They aren’t “incompetent” they are blinded and scared of the consequences if they’re wrong.
Sadly, the only way to prove the truth to them is fatal and leaves no chance for repentance. That’s why prayer and compassion are as vital as telling it like it is.

A new layer every 5 days.. It’s not possible to not see it. Imagine if your job was to count the rings of trees trunks and every five days a new ring would appear.

This ice core is 3.2 km long. It takes months to drill that deep, a new layer every 5 days. You must be willfully ignorant or willfully deceitful not to notice the layers piling up as they work. I have a really hard time believing someone didn’t notice it. We’re talking 80 new layers each year!

“You must be willfully ignorant or willfully deceitful not to notice the layers piling up.” This is exactly what God predicts people would rather do than face the reality that God and His judgment are true.
From what I’m reading, you’d rather trust people’s honesty than God’s testimony. People are very good at making their case look good and can show extreme confidence in their views. You might try checking things out for yourself if you want to find the truth.