Next week, a scientist with the Institute for Creation Research is participating in a debate with another Christian. Each man will be doing their best to prove their position is the most reasonable and the other’s is not only wrong, but damaging to Jesus’ kingdom.

What topic is so important believers are willing to hold a formal debate at a seminary to see who can convince more people?

Did God create the world by speaking it into existence in less than a week not too long ago? or did He use Evolution over millions of years to bring us to where we are today?

One of the things we are likely to hear from the Evolutionist is that focusing on Creationism, especially Young Earth Creationism, turns unbelievers away from Jesus. Christians who believe God used Evolution tell us

Let’s see how well these ideas hold water when we look at them carefully. 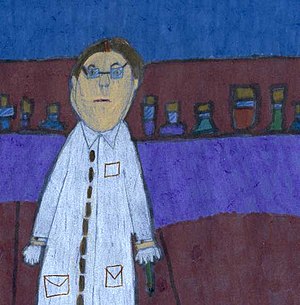 Do Young Earth Creationists ignore science? I’ve collected a couple important links on my For Teens page. The first encourages young people who take Genesis at face value to enter the sciences. We need lots of new people to search for the truth we find in the natural world. Then the first link under the skeptics arguments shows just how many active scientists don’t believe in evolution.

We don’t ignore science, we just refuse to interpret it the way the world wants us to.

The second point seems reasonable and serious. Who would put on a silly hat before heading out to witness? But, are we doing something unnecessary that could be avoided?

Here’s what God told us about how the world looks at everything He says, “For the preaching of the cross is to them that perish foolishness; but unto us which are saved it is the power of God.” I Corinthians 1:18

The only way to avoid looking foolish to unbelievers is to never tell them about Jesus’ cross or anything else God considers important. The reality that Jesus is powerful enough to use words to create everything (John 1:1-4 and Genesis 1) is awfully important. If He made it, He owns it. If He didn’t, He doesn’t.

Sure, people will think we’re foolish, but they thought Jesus was crazy, too (John 10:20). What’s more, although people who reinterpret the days of Genesis to mean long ages or even evolution can’t, the rest of us see what they’re doing. To believe both millions of years and the Bible you have to be really good at mental gymnastics or give up.

The last point is the most serious of all. How horrifying it would be to have someone’s eternal soul at risk because I wouldn’t drop some picky detail! But is this the reality we face?

The other week I heard a testimony at church. This person was at their wits’ end and knew something in their life had to give. Here’s what they said, “it was either atheism, or Jesus. Evolution was stupid, so Jesus won.”

For several years now, this person has been following God more and more closely because they first acknowledged Him as Creator.

A few days later, I caught the trailer for Creation Today’s new movie on Genesis. They’re bringing us into the process by raising funds to add 3-D technology to make this a top notch movie experience. Turns out the director found Jesus when he realized there really was a Creator God.

Then, watching the Galapagos Islands movie, I heard a bit of the producer’s testimony. He found Christ by reading Henry Morris and George Whitcomb’s classic the Genesis Flood.

All three of these people directly tied their choice to follow Jesus to the Creation/Evolution debate.

The truth is, the closer we stick to God’s Word, the more His power can flow through us. A God strong enough to speak the universe into existence in a matter of hours is powerful enough to transform me.

Answers in Genesis: Feedback: Are We Wasting Our Time?

Seven reasons why we should not accept millions of years

Dr. Gurney a testimony of following God both as an Old Earth and then Young Earth Creationist

Great post! I was told once that you don’t have to believe that God created the earth in 6 24 hour days to be saved. I had to agree with that. You need to believe in Jesus to be saved, but if we don’t believe what the Bible says about Creation, how do you know the rest of it, like the parts about Jesus, are true? It doesn’t make sense to me to only believe parts of the Bible and not others. If the Bible is God’s Word, which I believe it is, then it is ALL true! Thanks for sharing another great post!

The confusing thing is, some truly amazing people of God never accept His power to creat instantly. What a person believes about creation is *not even close* to a salvation issue.
Looking at people who believe in God-guided evolution and/or millions of years, it seems like their experience of His reality is strong enough to hold them firm. The worry is, how many people never take God seriously because if the old earthers are right, God is a cruel liar.