Limestone (and other) Cave Formations 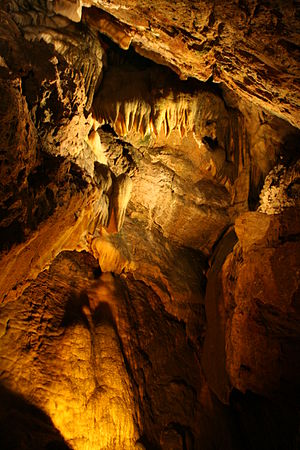 Since these are some of my very favorite works of our Creator God, I decided not to throw these onto the end of yesterday’s post on Caves so I could spend more time reveling in their awesomeness!  (If you’re just joining this study, you will want to start at the beginning with Limestone=Cement Part 2 and Travertine and Tufa so I don’t have to take extra space explaining those things again.)

OK, now that we’re all up to speed, let’s look at what is going on to form these amazing stone works!

All cave “decorations” are called “Speleothems” [spee-lee-oh-th–em], but that is way too hard to say unless you’re a scientist!  The ones we all learn how to say and write are Stalactite (the ones that stick tight on the Ceiling) and Stalagmite (the ones that are mighty to push up from the Ground).  But this is just the beginning of the variety we see, and we want to know how and why they form in the first place.

Except for Gypsum, which is another Calcium mixture that can even be formed out of Limestone, almost all of these are just underground Tufa and variously named Limestone formations.  I’m not going to take the time to go through each of the varieties of shapes we find in caves because the National Park Service and California’s Cavern Tours: Kids Pages have done a great job with amazing pictures!

I finally found a good page that tells us how the Carbon Dioxide gets into the ground water to form Carbonic Acid in the first place.  You know, the stuff that dissolves the limestone above the cave so it can drip down into it.  Here’s what Howe Caverns says: “Conditions are right for the process to begin when the water table lowers and air enters the cave. Calcite is dissolved from the limestone above the cave by slightly acidic water as it percolates downward through the soil.  In the soil, where plant and animal remains are decaying, the carbon dioxide content is about 300 times that of the outside atmosphere.”

So, we first need very high water to hollow out the Limestone and form the cave in the first place.  Then we need a lot of dead things in the ground above to decay and fill the water with CO2.  Hmmm, when would the world have been perfectly primed to form things like this?  And wait, there’s something else you need: more water to drip down through the soil and carry dissolved bits of Limestone with it!  As I mentioned yesterday, right after the Flood there was a period of hundreds of years of extra rainfall filling the earth with Ice and wet conditions.  You would also have the humidity to help these formations grow quickly.

One of the things the Howe Caverns page mentions is that temperature affects how a cave decoration forms.  It didn’t say how, so I had to hunt a little to find out.  Wikipedia tells us why, and we already knew it, I just didn’t know we knew it (are you confused yet?).  Remember how the Carbon Dioxide in water helps it hold on to the Limestone until it escapes (like soft drinks)?  Well, the same thing is helping the water drips in caves hold onto the limestone until it’s time to leave them behind as draperies and such. (This doesn’t work for gypsum, though, but those are only a small percentage of the world’s cave decorations.)  So, if you raise a cave’s temperature, you will form these decorations much faster than in a cool cave!  Since we know the ocean was much warmer during and right after the flood (I’ll have to write on this soon), you can add this to our list.

So, let’s review what you need to have in order to quickly form all the beautiful features we find in today’s caves:

All of these conditions were perfectly met by the Flood of Noah’s day and the climate of the next few hundred years as things began to settle back down!

Behold, a king shall reign in righteousness, and princes shall rule in judgment.  And a man shall be as an hiding place from the wind, and a covert from the tempest; as rivers of water in a dry place, as the shadow of a great rock in a weary land.  Isaiah 62:1,2

One of my early posts talks about quick forming cave decorations

Virtual Cave only talks about 1,000s of years, and has some amazing pictures to check out!

More about the chemical processes of Cave Formations