When I was very little, my parents took me to my first Chinese restaurant.  I loved the egg drop soup, egg rolls, and fried rice.  But the thing that stood out in my memory the most was a bamboo scroll with a painting of an impossible mountain.  It was shaped almost like the ghosts in Pac-man but made of rock and covered with bonsai-like trees.

For years I thought that mountain just existed in the artist’s imagination.  Until one day I saw a photograph of a mountain just like it.  Years later I found there wasn’t just one mountain, but a whole valley filled with them (actually, there are even more).  Even more recently, I found out what these mountains are called and how they became so fantastically shaped.

I had heard these mountains formed by water eroding away the rock from between highlands leaving the mountains behind.  But it was while studying Limestone that I found out this is what these rocks are made of.  Anytime a layer of Limestone or some other Calcium Carbonate rock gets worn down it is called Karst.

For some reason (wink, wink), limestone and other forms of Calcium Carbonate rocks need lots of water to form their wild shapes, even the ones now in deserts.

As water runs down into any gaps in the Limestone, it picks up enough Carbonate from the rocks and topsoil to form something called Carbonic Acid.  It isn’t dangerous to us, but it’s strong enough to dissolve more of the rock gouging out deeper and deeper pockets in the rocks.  If the layer of Limestone is thin, you get steeply eroded rocks like mini mountains a few feet high.

If the layer of Limestone is thick enough, you get round sinkholes (and lots of caves, but I’ve got to save them for next time!).  But if these sinkholes (and cave systems) get enough water, you are left with lonely mountains like this. 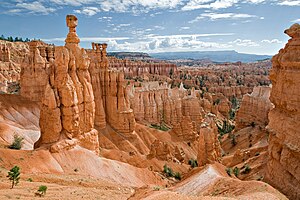 Karst Landscape, Bryce Canyon (when did this area have enough water to carve this out?)

Aqualab looked like any other Evolutionary site until they started talking about 1,000s (not millions) of years and had a link to ICR.  I’d add it to my list, but it looks like the rest of the site talks about pool maintenance and Tolkien!

Anyway, if the amount of Calcium Carbonate in the water is high enough and the volume of water is great enough, you can carve out these rocks at current rates in a matter of 1,000s of years.  If you have an even greater volume of rainfall, like we know there was during the Ice Age, you can carve out all these things quite comfortably in just a short time.

There are some absolutely mind blowing formations left behind by this wearing away. My favorites are still the mountains of Southeast Asia. There are hundreds of them in clusters scattered across southern China, Vietnam, Laos, and Thailand.  Part of the reason they have gotten to be so spectacular is because of the large volume of rain they still get in this part of the world.

Turns out there are areas of Karst all around the world. Most of them don’t look too different from ordinary landscapes, just with strangely worn rocks or round holes in the ground.  But some of earth’s coolest land formations are Karst.  I found one long page, filled with amazing pictures, showing a whole bunch of these places.  The titles are above the photos, so you don’t get confused and think there is a rainforest in Indiana, USA!

Another fascinating Karst landscape is found in the wilds of Madagascar.  I sure wouldn’t want to have to walk through this area, but it would be beautiful in a helicopter.  Turns out Lemurs don’t seem to mind this strange spiky landscape at all.

How wonderful it is to know the Artist responsible for these amazing sights!  How awesome, not just to know who He is, but to be part of His family and be loved by and known by Him!!!

If you don’t know the tune you can listen online HERE:

Let all things now living a song of thanksgiving To God the Creator triumphantly raise,

Who fashioned and made us, protected and stayed us, Who still guides us on to the end of our days.

His banners are o’er us, His light goes before us, A pillar of fire shining forth in the night,

Till shadows have vanished and darkness is banished, As forward we travel from light into light.

His law He enforces, the stars in their courses, The sun in His orbit, obediently shine.

The hills and the mountains, the rivers and fountains, The deeps of the ocean proclaim Him divine.

We too should be voicing our love and rejoicing; With glad adoration a song let us raise

Till all things now living unite in thanksgiving To God in the highest hosanna and praise!