Tufa [too–fah] and Travertine are rocks/formations that form when water filled with Calcium Carbonate bumps against something and releases its CC. This can be in flowing or more or less still water. Here’s how to tell them apart: Warm water forms Travertine; cool, freshwater environments form Tufa.

So, where do you find Travertine? If you read about where Travertine is located around the world you’ll see that most of them are at “geothermal” locations. That means places that are heated from the depths of the earth.  We call places with geothermally heated water hot springs (and geysers).

I asked the USGS to see if ALL hot springs form Travertine or not. Nope, just the ones with Calcium Carbonate in the water.  Umm, I think I could have figure that out, but it’s good to know that a hot spring doesn’t have to have CC. I did find a cool page of a young geyser in Iceland that is slowly forming some Travertine today. The geyser pictures are really great.

There is so much travertine in some places like Italy, that they’ve been using it to build buildings since the time of Christ. The Colosseum is made from it along with most of the other famous fountains and palaces of Rome. The quarries the Romans used have Travertine deposits over 90m [295ft] thick and are still in use today! They do have layers of fossils throughout, mostly water creatures, but also some cool ones with leaves.

Tufa is made of the same Limestone, but without all the holes that the hot springs fill Travertine with (Volcanic Tufa is something different).  There are several lakes that have Tufa formations as well as some rivers systems around the world. I’ll let this webpage from California’s Mono Lake (22 miles from Yosemite) explain the details. 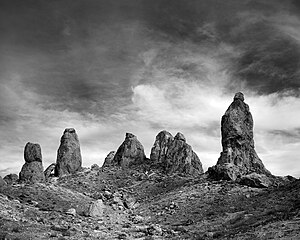 Mono Lake has some pretty amazing formations, including some that show the water level used to be quite a bit higher (you’ll have to click on the link because the pictures are under copyright).

There is a dried up lake nearby called Searles Lake that has Tufa pinnacles 100ft [30+m] high. I found a great website talking about how the climate changed leaving these lakes high and dry; they’re just off by about 11,000 years! National Geographic has a good tiny article on a similar completely dried up lake in Arizona.

One of the cool things Tufa will do is dam up rivers forming waterfalls. Croatia  has some amazing ones, their Big Waterfall is 78m [256ft] high..  This PDF talks about Australia’s three rivers draining from a huge limestone deposit all with Tufa dams (if you have time, it has some good pictures scattered around).  I read some about Tufa river dams in Spain and Ethiopia, but couldn’t find any pictures of them.

Tufa doesn’t have to form only on natural things.  I found a Roman aqueduct showing buildup with a great picture.   You can also read more about petrification in one of my early posts.  In that post I mention England’s Petrifying Well that turns things (like teddy bears) to Tufa!

That the generation to come might know them, even the children which should be born; who should arise and declare them to their children: that they might set their hope in God, and not forget the works of God, but keep his commandments:  He clave the rocks in the wilderness, and gave them drink as out of the great depths.  He brought streams also out of the rock, and caused waters to run down like rivers. Psalm 114:6,7,15,16

PS I had so many great quotes today that I’ve posted them separately HERE.