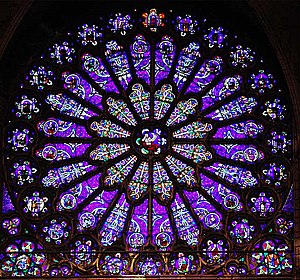 Rose window in Basilica of St Denis, France, depicting the ancestors of Christ from Jesse onwards.

I had planned on a topical article today, but there has been so many other things happening I’m doing two posts of links instead.

To “build my platform” as all writers are encouraged to do, I’ve finally joined facebook (you can also follow me on twitter- I think).  As I do here, I want to have as many links to other Creationist organizations and speakers as possible and found a new one!

the Genesis Creation Science Institute is a local organization in the LA area of California.  They have a very nice website with lots of resources and even a kid’s camp  out there one week each August!  I checked out their links page (all four resources pages have the same info) and am adding these sites to my links lists:

Evolution Flunks Botany– I’m definitely checking that one out, but it looks kind of technical (lots of big words)

Lambert Dolphin’s Library has a huge section of articles on Science and the Bible.  For example, if you’ve ever wondered how all the different versions of the Genealogy of Jesus fit together (which I didn’t start to think about until I was in my teens), you will enjoy this article.

I’ve had Creation Evolution Headlines up for a while, but never really checked it out.  I’m going to subscribe today so I can keep up to date on what’s going on in science and origins.

PS At Don Ruhl of The Bible Meditator‘s suggestion, I just submitted a request to write for Answers Magazine.  I had seen their submission form a while back, but had no credentials yet for them to want me.  We’ll see what they think of my writing.  I just hope if they do like it that I’ll have time to keep up with you all, because you guys are the best!