Answers in Genesis has been talking a lot about what it means to know that all people are children of Adam, Eve and Noah’s three sons and daughters-in-law. As Bible believers, we have no reason to think that we are better or worse than anyone else because of our body shape, size, color, or gender. We are all created in God’s image “So God created man in his own image, in the image of God created he him; male and female created he them.” Genesis 1:27,  So we are all one enormous family.

This is one of the most wonderful gifts God has given us. About the only thing that I can think of more wonderful than this is making Jesus a member of our family to be our Savior. “And she shall bring forth a son, and thou shalt call his name JESUS: for he shall save his people from their sins.”  Matthew 1:21

I was really pleased by THIS ARTICLE where the former leader of Answers in Genesis’s UK branch, Dr. Monty White, talks about how people responded to his talks about being One Race. It’s not an eye-crosser, so I’ll just let you check it out for yourself.

Often I like to play “what if?”  with different things that people believe. There is only One Truth and that is Jesus and His Word, “I am the way, the truth, and the life: no man cometh unto the Father, but by me.” John 14:6. But it can help us understand how wonderful God’s gifts are when we think about what other people believe the world is like. For example, there is no other religion that puts girls on the same level as guys before God!

So, let’s play “what if?” with Evolution and races. One of the big things Darwin wanted from Evolution is to feel that he was better than others because he was English. If someone’s face ‘looks’ more like a monkey’s to someone else, then they must not be as highly evolved and are therefore worth less to the future of humanity. If you’re old enough to handle seeing some of what people have done because they really believed this, watch Ben Stein’s movie Expelled to see some of the things that happened in the 20th Century because of these beliefs. 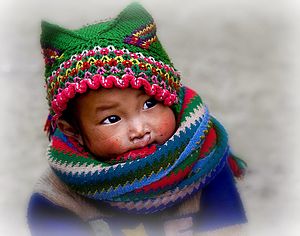 This is a H’Mong baby girl. H’Mong is one of the ethnic minorities living in Northern mountain area of Vietnam. She has pink cheeks due to the cold weather and sun rays. (Photo credit: Wikipedia)