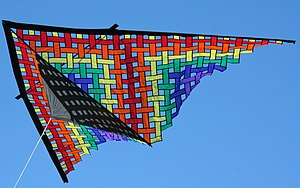 Ever seen or flown a kite shaped like this? They are called a delta-wing after the Greek letter shaped like a triangle and are popular because they are so easy to fly. Something about that triangle shape is really good at catching a breeze. Changing the design just a bit also lets you build a sturdy kite able to handle strong winds without problems.

Sharovipteryx [shar–ohv–ip-ter-iks] mirabilis is the name we’ve given to a fossilized reptile found in 1971 in Kyrgyzstan. We’ve only found a single fossil of it, but the one we have is really cool. The guy who found it, A. G. Sharov, tried to give it a name meaning “foot wing” but a bug already had that one, so others named the fossil after him instead.

This reptile is really tiny; from nose to tail tip it was only 20 cm [7.8 inches] long and over half of that length was a thin tail.

Sadly, when they dug the fossil out, the rock around the front legs was damaged, so we have to guess whether they had skin stretched between them. What they did notice was something odd and amazing about its back legs.

This painting is one artist’s version of how sharovipteryx could have looked. Another artist’s version is my favorite, but you’ll have to follow this link to see since it’s under copyright.

That webbing you see around its back legs is made of skin and called a membrane. (Membrane is the name we give to any “thin and pliable sheet or layer” of tissue.) Bats use membranes for their wings and so did pterosaurs.

It’s a little hard to picture how sharovipteryx’s body worked because it’s so different from the animals we still have around today. Can you imagine trying to explain how one looks to someone who’s never seen it before! Now, picture what this little guy would have looked like when it folded its legs to climb or move when it wasn’t flying? Wild, huh? 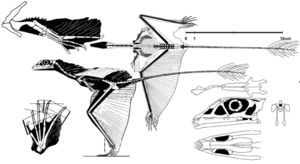 Sharovipteryx mirabilis drawn by David Peters. Check out the bottom drawing for an idea of how it looked standing

Here’s where things get really interesting. Some scientists decided to study how an animal like this would be able to keep from crashing and go where it wanted. Do you think they found everything was crazy and ready to send this evolutionary experiment to an early grave? Hardly!

The study discovered the Sarovipteryx’s “triangular hindlimb membrane would have allowed for efficient gliding flight across a range of speeds.” Its wings would work well going fast or slow.  They figure it could control how fast it went by moving its knees and tipping its body as needed.

They really wished there was enough information about those front legs, though. If they had membranes too, it would have made things even easier for sharovipteryx to go in the direction it wanted. But, the study figured even if the front legs didn’t help at all the tail would make it possible for it to glide. It makes me wonder if it was possibly designed to be able to grasp things in front when it needed to.

It would be really cool if we ever find another fossil of this kind of creature. What do you bet it will show sharovipteryx was even more amazingly designed than we already can see?

The guy who discovered this little fossil also found another cool lizard nearby: the Longisquama. Can you guess what Evolutionists really wish those things on its back were? Yup, they are still trying to make the case that these very cool spines are proto-feathers. Why? Because birds HAD to evolve from something! Or, did they?

We know there is an all knowing, genius, Creator who has an imagination to beat ours all hollow!

With them in the boat were pairs of every kind of animal—domestic and wild, large and small—along with flying creatures and birds of every kind. Genesis 7:14

Oh, yes, these land reptiles were found in deposits known to have been laid down by water.

You can make your own Delta kite with these directions

Very cool, Ms. Cheri! Our God has such an unlimited imagination! 🙂

Doesn’t He though? It’s exciting to find out about some creature I’d never heard of before and even more so to be able to share them with others. This one was long overdue. Every other website mentioning it with any detail had the word “evolution” in the same sentence.