Did you know the aardvark is a Living Fossil? Not only do they show up low in the fossil record for a land animal, they haven’t changed much since then.

You hear about aardvarks a little more than echidnas (outside of Australia) perhaps because their name works so well in dictionary searches, but do you know very much about them?

We’ve found enough fossils to know aardvarks used to come in more varieties than we see today and lived in a much wider area (fossils have been found in Africa, Europe and Asia). It’s a good thing for Africa’s ecology that some survived to repopulate it.

Aardvarks are known for two things: their taste for ants and termites and their digging skills. It’s said they can smell a lion coming and dig a hole big enough to protect their up to 5 ft [150 cm], 150 lb [68 kg]  body by the time it gets there. That’s some fast and powerful digging!

Aardvark dens can be up to 30 ft [9 m] long with the largest having several round rooms and multiple entrances. Their ears are designed to fold back to stay clean and out of the way as they climb inside. They spend the hot day curled up inside and head out to search for food in the evening.

But most aardvarks travel for days searching for food, so they’ll dig a quick burrow wherever they end up and settle in for a night or two.  When they move on, other creatures move in. This is one of the main reasons they are considered important to the ecology of Africa.

That pig-like snout is extra interesting. It has lots of long hairs to help keep out dust plus flaps of skin to cover them during furious digging. An aardvark’s eyes don’t work too well, but their nose sure does. They walk in a zigzag up to 120ft [36m] sniffing for moving ants or nests. When they find a nest and start digging, they close the flaps to keep bugs from crawling in. Although, one website says they just snuffle any insects that make it up there for dessert. Eeew!

Usually, aardvarks collect their lunch with their tongue. It’s over a foot [30 cm] long and covered with gooey saliva. When the ants or termites try to escape through the hole in their nest, they get gobbled by the 1,000. Some aardvarks have been known to eat over 50,000 bugs in a day.

Aardvarks can break open a cemented termite nest better than a man with a pickax could do it. But, they only eat termites when there aren’t enough ants. During the rainy season, the termites are safe, but the ants have much to fear.

When things dry out, another resident of central Africa gets some vital help, the aardvark cucumber. This unusual plant grows its fruit underground where it would be hard to find for most animals, but that’s no problem for the aardvark! After eating the pulp and seeds whole, another habit of this animal kicks in. They are neat and clean and make sure their stinky gets covered up well. It’s like they were programmed to be the plant’s gardeners!

An aardvark mom gives birth to a roughly 4 lb [2 kg] baby after about 8 months of waiting. The little one stays with its mother for 6 months (if it’s a boy) to 2 years. Girls stay with their mom until a new baby comes along; then, it’s off to the solitary life of the typical aardvark.

Aardvark’s are specially designed to fit in well where they live. They are a little piece in the giant web of life God planned for filling the whole world. Let’s praise and honor the One smart and powerful enough to create them and set them in place!

Lord, all living things depend on you.
You give them food at the right time.
You give it, and they eat it.
They are filled with good food from your open hands. Psalm 104:27,28 Easy-to-read Version

Just wait til you see the quotes I’ve collected, too!

Besides the websites already linked, the zoo keepers journal has lots more information about aardvarks 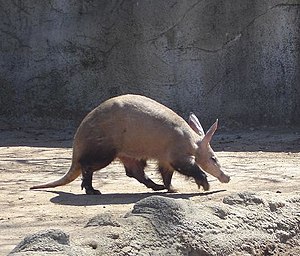 “Aardvarks are a blast from the past. The genetics of the Aardvark goes back 160 million years, back to the Jurassic period” What Do Animals Eat?

Well, not that far back, but aardvarks do go back to just 6 days after the universe got started!

“The aardvark is the last surviving member of an odd and primitive order of ungulates (hooved animals) and might have survived by evolving away from hooves, and developing the incredibly powerful claws it uses to dig sleeping burrows and devastate termite mounds. The aardvarks closest living relative is probably the elephant.” Animal Facts Encycolpedia

“Might have survived by evolving…”? We finally have a set of “fuzzy words” to work with! Sounds to me like they’re dreaming up a just so story. 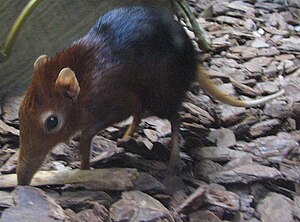 These genetic studies make fun reading. It used to be the only thing Evolutionists had to go on when putting together a “tree of life” was how something looked and acted. Now, things are getting completely reshuffled because of genetic studies.

Here’s what they won’t think about. When a Lego (or any other) designer plans out a new item, do they make every piece from scratch? Not if they can help it. They repurpose and recycle perfectly good designs from other projects for the next one. Just because a lot of pieces are similar or even the same doesn’t mean one gave birth to the other.

You don’t have to have a common ancestor to have similar plans and parts, a common designer makes just as much sense, or really, way more sense!

I made the earth and all the people on it. I made all the animals on the earth. I did this with my great power and my strong arm. Jeremiah 27:5 Easy-to-read Version