END_OF_DOCUMENT_TOKEN_TO_BE_REPLACED

Last year my oldest two kids and I got to read a lovely book on Michelangelo by Diane Stanley.  I highly recommend her book both because of the depth of coverage for children, but also how deftly she avoids showing complete indecency so I didn’t have to keep holding my hands over particular portions!

One of the things she pointed out was the find that led this brilliant artist beyond his early works to the full flower of his art.  This statue on the right was his first commissioned marble and shows how he already carefully observed the human body and the way cloth drapes.

His next work, the famous David statue, was also a masterpiece of copying the natural form in hard stone.  But both of these statues were very still; there was only a little life to, so his range of style was limited.

Then something amazing happened.  A farmer ran into some broken statuary on his farm and informed the Pope.  The Pope asked Michelangelo and another architect to check it out and they pieced together one of the greatest statuary figures we had in existence: the  Laocoön [lah-oh-koh-on] group.

This is a piece of art showing snakes killing a man and his sons for trying to warn the Trojans about the horse they had been offered by the Greeks.  It has been dated to some time shortly before the birth of Christ.  It was certainly made by 50BC and maybe as much as 200 years before if it is the Greek original and not a Roman copy.

The thing that impressed Michelangelo about this piece is the movement it shows.  Last year my kids and I studied an art book that talked about this.  You can see movement in a still painting or sculpture by imagining what would happen next if gravity took over.  This piece is chock full of movement.  It looks like a movie still caught in the middle of an action sequence.

From this time on Michelangelo’s work showed movement like that.  I’ve seen that there is a recent accusation claiming this piece is a forgery by Michelangelo himself trying to earn a quick buck (the farmer was paid handsomely for his find by the Pope).  There doesn’t seem to be enough proof to lay this claim to rest, but it seems very odd to me that Michelangelo’s style should change so dramatically after studying his own work!

The other thing I learned recently was that Leonardo Da Vinci also tried to copy the ancients.  Not 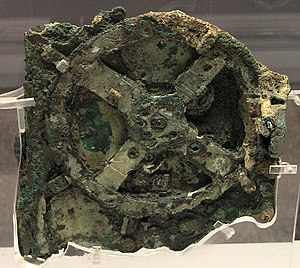 artwork this time, but technology.

My very first post on the ancients mentioned the Antikythera Mechanism which is so complicated we are still trying to figure out what exactly they were using it for when it was sunk.

One of the interesting things that I ran into was that there is also a description of something simpler to use as an odometer.  We aren’t sure whether Vitruvius designed this machine shortly before Jesus’ birth, or if Archimedes had made it 200 years earlier!

Da Vinci tried to copy this old idea and it worked: on paper.  But the secret of triangular gears had been lost.  It wasn’t until we remembered to use pointed gears like the ancients did that we could make a working device similar to the originals.

We have always been smart and talented.  Even our best minds have been blessed by the guidance of their forefathers.

If only we will use our abilities to praise and honor our Creator who gave us these powers in the first place!

I wisdom dwell with prudence, and find out knowledge of witty inventions.  Proverbs 8:12