Did you know dolphins/toothed whales and bats use the same kind of system to “see” with sound? Scientists call this ability “echolocation” [I bet you can figure out why: echo + location!] and it is really fun to learn about.

Here’s where things get tricky for an Evolutionist. They don’t believe there was a common echolocating ancestor for both dolphins and bats. So, how did such different animals both get the same ability? 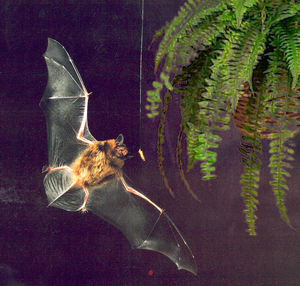 We Creationists don’t have a hard time with this. We know the same Designer God used a really good idea to help two of His creatures. He programmed them both with the same type of skill to help one in murky water and another in the dead of night (or caves).

But, what about people who choose to believe the only way anything can do anything is because of mutations? Do they throw up their hands and say, “I give up. There must be a smart Creator behind such amazing things!” Well, a few have, but most just turn to another kind of “just so story” to explain these amazing similarities.

They call their story Convergent Evolution:

Dictionary.com: The appearance of apparently similar structures in organisms of different lines of descent. Origin: 1965–70

The Free Dictionary: The appearance of similar forms and/or functions in two or more lines not sufficiently related phylogenetically to account for the similarity.

The evolutionary development of similar structures in two or more species, often widely separated phylogenetically, in response to similarities of environment; for example, the wing-like structures in insects, birds, and flying mammals.

Does this really explain anything? Is it even scientific? Can you test this, observe this, experiment with this? Well, they’ve been trying, but haven’t gotten anything like “convergent evolution” to happen in a lab.

You might have your parents help you do a GoodSearch for “convergent evolution” and see the kinds of things this process is supposed to have done. Here are some examples I’ve found. Just be prepared for their unwavering confidence that convergent evolution actually happened:

Here’s the bottom line. No human being was around when the first dolphin, bat, or octopus began. We all have to believe something we didn’t see.

Creationists have chosen to trust the God who was there and told us about what He did in the Bible. Many people don’t want to do this, so they come up with other ideas. But either they are the people who invented the ideas or they trust the people who did.

Who will you trust?

PS Echolocation is one of the things we’ve studied to use in our own technology. Know what we call it? Sonar. We’ve been using Biomimicry for way longer than we’ve been using the title!

Professing themselves to be wise, they became fools, And changed the glory of the uncorruptible God into an image made like to corruptible man, and to birds, and fourfooted beasts, and creeping things. Romans 1:22-23

Some Creationist articles on convergent evolution:

Answers in Genesis: Do Genetic Similarities in Bats and Dolphins Echo Evolutionary Convergence?

Institute for Creation Research: How Some Insects Can Eat Poisonous Plants

Messier 53 has surprised astronomers with its unusual number of a type of star called blue stragglers.

During my research I noticed how common it is to run into articles that talk about how “surprising,” “unexpected,” or even “baffling” the results of a study or find is to scientists.  Although I know Creation Scientists are probably often surprised as well, I can’t help thinking that scientists would be less surprised if they all had a more accurate worldview.

Here are some of the surprises that we’ve uncovered recently:

One of the ways Evolutionists get around characteristics that “unrelated” creatures have in common is called Convergent Evolution.  This is not something they mention often to children, because you’re too smart for it, but they talk about it a lot in the science community.  Somehow, I don’t think they would have expected development to happen like this if they hadn’t seen it first.

What do they think happened in Convergent Evolution?  Here’s the story from Simple Wikipedia:

“Convergent Evolution is what happens “when two species from unrelated lines develop the same traits or features. This happens because they live in similar habitats, and have to develop solutions to the same kind of problems.”

This describes what we see, but gives no reason why it should happen the same way in two or more unrelated creatures (why didn’t the bat start spinning a web, or grow a long sticky tongue to catch mosquitoes instead of wings?).  The faith of Evolution shows up more and more.  They dare not believe in a smart Creator, so they change the story so Evolution fits no matter what they find.

As for me, I’m going to worship and honor my super genius Creator God as my Savior and Lord!

For the wrath of God is revealed from heaven against all ungodliness and unrighteousness of men, who hold the truth in unrighteousness;
Because that which may be known of God is manifest in them; for God hath shewed it unto them.
For the invisible things of him from the creation of the world are clearly seen, being understood by the things that are made, even his eternal power and Godhead; so that they are without excuse:
Because that, when they knew God, they glorified him not as God, neither were thankful; but became vain in their imaginations, and their foolish heart was darkened.  Romans 1:18-21

For more check these articles out: