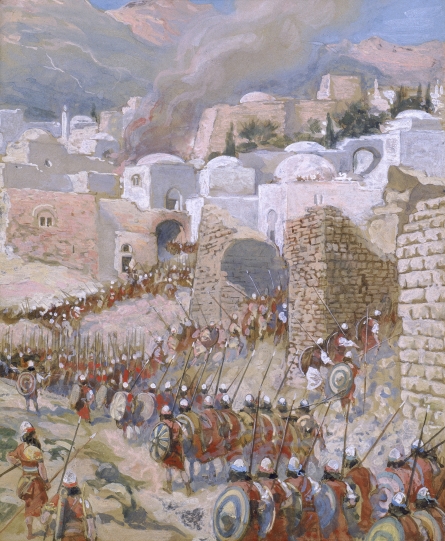 If you pay attention to what’s going on as you read the Bible you will catch on pretty quickly that the Holy Land is located in an earthquake zone. Sometimes earthquakes are even major players in the action of Bible events.

I’m going to send you to a video with Dr. Steve Austin in a minute, but let’s see some of the times where earthquakes had a part in events recorded in the Bible:

“And the Lord began to destroy Sodom and Gomorrah. He caused fire and burning sulfur to fall from the sky. He destroyed the whole valley—all the cities, the people living in the cities, and all the plants in the valley.” Genesis 19:24,25

Although an earthquake isn’t mentioned, how did God get the volcanic stuff to come out? Volcanoes and earthquakes are bosom buddies.

So then the priests blew the trumpets. When the people heard the trumpets, they began shouting. The walls fell down, and the people ran up into the city. So the Israelites defeated that city. Joshua 6:20

Again, the earthquake isn’t mentioned, but God doesn’t do magic; there was some physical cause for the walls to drop.

And Jonathan climbed up upon his hands and upon his feet, and his armor bearer after him: and they fell before Jonathan; and his armor bearer slew after him. And that first slaughter, which Jonathan and his armor bearer made, was about twenty men, within as it were an half acre of land, which a yoke of oxen might plow. And there was trembling in the host, in the field, and among all the people: the garrison, and the spoilers, they also trembled, and the earth quaked: so it was a very great trembling.  I Samuel 14:14,15

Suddenly there was an earthquake so strong that it shook the foundation of the jail. All the doors of the jail opened, and the chains on all the prisoners fell off. Acts 16:26

This wasn’t in Israel, but shows God controls events anywhere.

Every once in a while God uses His natural world to accomplish His plan for history. He has more subtle ways of doing this, but when he uses big things like meteorites (Joshua 10:11) and earthquakes, people pay attention! They also have a much harder time hiding the evidence. 😀

One other thought that came to me while watching Dr. Austin: just as God has positioned the world so we can study space, so He prepared the way for us to study these earthquakes. How many lakes in the world are lifeless, so the sediments settle undisturbed for millennia? There are a few, but it is cool to know one of them is perfectly located to preserve a record of God’s truthfulness.

Our God is great, with the most mind-boggling foresight imaginable!

The video starts just a tad dry through the first part of the talk, but after the break it is WAY COOL.

The captain of the guard and those with him, when they saw the earthquake and everything else that was happening, were scared to death. They said, “This has to be the Son of God!” Matthew 27:54 The Message

I was alerted to this video by Creation Sensation, you can follow them for yourself to keep up with lots more.

Dr. Austin’s findings have been available at the Institute for Creation Research for some time, which is where I first read about them.

PS I’d really like to ask him just how certain that AD 33 crucifixion date is. It could settle a debate that goes back to the AD 300s!