God knew if Noah didn’t build an ark, every land animal would have gone extinct.

But what about the animals that couldn’t live on the ark?

Fish and other water creatures

First we’ll look at what they need to stay alive.  They need

A world-wide Flood with lots of magma and superheated water would mess all of these things up, so how did the fish we see around the world survive it?

If you’ve ever found a fossil in your garden or on a walk, you know that there are billions of sea creatures that did die. The whole earth is covered with them. Just like most of the land animals didn’t make it through the Flood year, most of the water creatures were killed and many turned to stone as a memorial to God’s judgment of people’s sin.

But enough survived to allow both the oceans and rivers to fill up with life again. So some had to survive.

Here are some of the ways we know of that God could protect some of these creatures during the Flood.

It is sorted into layers depending on what is in it and how warm it is. Cold water sinks (until it freezes), and so does saltier water.  So, if a section of water is warmer, or lower-salt, it floats in layers above the rest of the water. Wind also will pull this warmer, less salty water out of the way allowing deeper, cooler water to rise. There is a deep layer of water that flows off of the Antarctic coast that is less salty than the water above it, but sinks because it is cooler.

Mouths of the Amazon River- NASA

Today there are some very interesting areas where salt and fresh, cool and warm waters mix (or rather don’t mix) and make a very complex layering, swirling water system.

The Amazon River is one of these places. There is so much fresh water flowing out of the Amazon that the surface of the ocean beyond its mouth is less salty for more than 100 miles [160 km]!

Trapped areas of water can be quite different from the open ocean as well. The Black Sea is unusual with the water near the surface being only about half as salty as regular sea water, but with deep water areas that are cooler and saltier. They have found a river running along the bottom of the Black Sea from the Mediterranean that is so much denser that is flows down like a waterfall at one point!

Was the Ocean that Salty to Begin With?

Something people almost never consider is how salty the original ocean would have been. There is exciting science showing much of the salt on earth came from deep underground like magma. The first ocean might have been a lot less salty before the Flood and only changed to close to today’s levels as the water picked salt up from the land and carried it down.

We also know that during the Flood there were pockets of water that didn’t get swirled around so badly. For example, Ayer’s Rock in Australia is at the bottom of one of these basins. This area would have protected some water animals from being swirled away.

We can’t know exactly how God protected the kinds of sea creatures that are still alive today because we weren’t there and He didn’t tell us. But we know this: God cares for His creation. He is sad when our sin makes the world a painful and deadly place for His creatures.

The fossil record shows us that many of the varieties of all animals God originally created are not alive today. We also know that when Jesus comes back to earth as King, He is going to restore the waters to great fruitfulness. What a glorious time that will be!

Here’s an experiment you can do to see how this all works:  Home School Science Press: Saltwater and Heat Convection

Lear more about the creatures themselves in How did Freshwater Creatures survive the Flood? Part 2

Then said he unto me, These waters issue out toward the east country, and go down into the desert, and go into the sea: which being brought forth into the sea, the waters shall be healed.  And it shall come to pass, that every thing that lives, which moves, where ever the rivers shall come, shall live: and there shall be a very great multitude of fish, because these waters shall come thither: for they shall be healed; and every thing shall live where the river comes.  And it shall come to pass, that the fishers shall stand upon it from Engedi even unto Eneglaim; they shall be a place to spread forth nets; their fish shall be according to their kinds, as the fish of the great sea, exceeding many. Ezekiel 47:8-10

Institute for Creation Research How Could Fish Survive the Genesis Flood?

END_OF_DOCUMENT_TOKEN_TO_BE_REPLACED 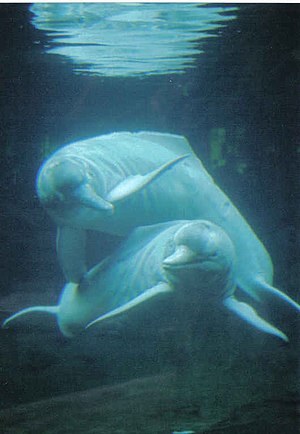 Let’s start with the Amazon/Pink River Dolphin’s first cousins, the Bolivian River Dolphin.  They live in the same river system (in the Madeira, a tributary of the Amazon), but up a  225 mile (360km) stretch of 18 rapids. I couldn’t find the height of the falls/rapids they are talking about, but this blog post will give you an idea of how much of a drop there is in places.

How did they get there?  National Geographic says that there was a drought about 100,000 years ago that stopped the Bolivian sub-group from mingling with the rest of the Amazon Dolphins.  That would have been some “drought”!

We don’t have to make such speculations since we know these dolphins settled into their current location between the Flood’s peak and the end of the Ice Age.  Having been separated all this time (around 4,000+ years), they are different enough from their downriver cousins to be classified as a separate “sub-species” now.

There are several other River/Brackish Water Dolphins along the South American coast.  The La Plata or Franciscana Dolphin has members in the ocean, in the mouths of rivers around the Southeastern coast and up river far enough to be considered River Dolphins.  They have dorsal fins like ocean dolphins, but long snouts and flexible necks like River Dolphins.

All River Dolphins are at risk of going extinct because their homes are limited to one area, so if something happens to their particular river, they’re stuck!

The Dolphins of South America are not being treated meanly on purpose (except for some stories of fishermen using their meat as bait), but accidents happen when people are around, and you saw in Part 1 how long it takes for a new generation of young dolphins to replace killed ones.

In South America there is bootleg gold mining going on which leaches mercury into the water to the fish. When the Dolphins eat these fish, they get high doses of mercury and can die out in that area.  Of course, mercury in the water isn’t good for people either, so the governments of these places are working to stop this from happening.

The River Dolphins of South Asia aren’t doing so well, though.  The Baiji (Buy-G) or Yangtze Dolphin hasn’t been seen for sure since before 2007.  It looked a lot like the South American River Dolphins but was bluish-gray in color.  Adults could be so pale that they were called the White Dolphin.  Scientists figure that even if a few of these shy animals are still living, there aren’t enough to rebuild a healthy population again. Because of the thoughtlessness and poverty of people along the Yangtze river, we’ve lost another animal to the fossil record.

In Southwest Asia live the Indus River and Ganges River Dolphins. I don’t have room to write more about them, so be sure to follow the links to see where they live. They are also endangered with numbers of only a little over a thousand of each group.

These River Dolphins are known for being very slow swimmers with eyes that have no lenses so they’re almost blind.  So, what they do is swim on their sides at the bottom of the river and open their mouthes when they feel and hear something to eat ahead.  Like other River Dolphins they like fish, shrimp and other crunchy things that live along the river bottoms.

Besides these groups of properly titled River Dolphins, the Solari (aka Tucuxi, see Part 1) of the Amazon and the Irrawaddy dolphin of South Asia also live in rivers and their deltas.  But these are both classified as part of the group of ocean living dolphins.  In fact, both of these varieties have saltwater cousins.  They have dorsal fins and don’t have extra long snouts like most River Dolphins.

Here are today’s Evolutionist quotes (I promise I’m not hunting for these, they just keep coming up!):  “They [River Dolphins] are perplexing creatures, having both some of the most advanced characteristics of all living cetaceans and some evolutionary holdovers from many eons past.”  From Think Quest

“The ancestor of the Yangtze river dolphin resided in the shallow sea that inundated the Yangtze River Basin during the globally high sea levels of the Middle Miocene period (approximately 20 million years ago).”  From NOAA Fisheries.

They’re quite right, all you have to do is take out about 19.9957 million years!

Plus, the Whale and Dolphin Conservation Society

So is this great and wide sea, wherein are things creeping innumerable, both small and great beasts….  These wait all upon thee; that thou mayest give them their meat in due season.  That thou givest them they gather: thou openest thine hand, they are filled with good.  Thou hidest thy face, they are troubled: thou takest away their breath, they die, and return to their dust. Thou sendest forth thy spirit, they are created: and thou renewest the face of the earth. Psalm 104:25-30

Then said he unto me, These waters issue out toward the east country, and go down into the desert, and go into the sea: which being brought forth into the sea, the waters shall be healed. And it shall come to pass, that every thing that liveth, which moveth, whithersoever the rivers shall come, shall live: and there shall be a very great multitude of fish, because these waters shall come thither: for they shall be healed; and every thing shall live whither the river cometh. Ezekiel 47:8,9