And God said, Let there be light: and there was light. Genesis 1:3

There are some Christians who don’t believe that God meant Genesis chapters 1 and 2 actually happened as God tells us. They believe that God was just writing beautiful poetry to express His Evolutionary creation.

One of the reasons some say the days of creation couldn’t have happened the way God tells us is because light was created on Day One, but the sun wasn’t created until Day Four. They can’t believe that God would be able to produce light without a natural source.

But is this the only time God talks about light without sun or fire?

And the LORD went before them by day in a pillar of a cloud, to lead them the way; and by night in a pillar of fire, to give them light; to go by day and night: Exodus 13:21

This was no ordinary fire. There was nothing under it that was being burned up. After the Tabernacle was put up, the pillar spent all its time right above the Tabernacle, but it was never harmed (Exodus 40:38).

And it came to pass, when Moses came down from mount Sinai with the two tables of testimony in Moses’ hand, when he came down from the mount, that Moses [knew] not that the skin of his face shone while he talked with him. Exodus 34:29

This verse tells us a very interesting thing about what happens to people when they spend time around God. Their exposed skin glows! Later in the chapter Moses tells how he covered his face so he wouldn’t scare the people around and it took some time (days or even weeks) for his skin to get back to normal.

There are people who think this probably happened with Adam and Eve before the Fall as well. My dad believes this, and so do the people making this movie (at least that’s what it looks like in the preview). Either way, we know people can shine without the sun, just from being near God.

God Himself glows like a rainbow. There are four verses in the Psalms that talk about God shining on His people (Ps 67:1; 80:3,7,19). Daniel prayed that God would shine on His sanctuary in chapter 9:17. If anyone still doubts that God meant to give us the idea that He glows very brightly have a look at this passage:

And the city had no need of the sun, neither of the moon, to shine in it: for the glory of God did lighten it, and the Lamb is the light thereof.  And the nations of them which are saved shall walk in the light of it: and the kings of the earth do bring their glory and honour into it.  And the gates of it shall not be shut at all by day: for there shall be no night there. Revelation 21:23-25

Unless you are willing to say that the New Jerusalem that lasts forever is just a beautiful poem trying to describe what God actually meant, this is plain as day. Only a small, weak god would need to first create a sun before it could make light. Just like only a small, weak god would have to use something so painful and wasteful as Evolution to make the world we see around us.

Thank God He is actually great and mighty. His power is without limits. All Jesus had to do was speak the word and it was. Light, land, life are all perfectly planned from His mind straight to being real around and in us!

Where is the way where light dwells? and as for darkness, where is its place?  Job 38:19

I checked out what the Easy-to-read Version had for this verse.  It just said, “where does light come from, where does darkness come from?”  Is that accurate to what the Hebrew says?

This verse is recording some of the words of God Himself just after He started answering Job.  Let’s see if He knew what He was talking about! 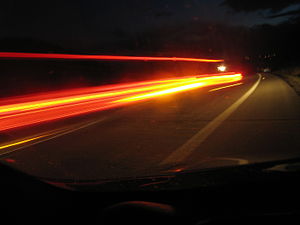 Everyone knows that light is the fastest moving thing there is.  We see the lightening a number of seconds before the sound gets to us in distant strikes because sound only travels 1220 km/[760 miles] per hour at sea level.  Light travels (check out the cool picture on that link) in a vacuum at 299,792.5km [186282.4 miles] per second (ps).  There are 3,600 seconds in an hour, so light has gone over a billion kilometers by the time sound has gone 1,220 kilometers.  That’s fast!

So, we know that light is on a really fast journey all the time.  What is the “way” it is on?

Light usually acts as a wave.  The illustration on the “Light travels” link shows this nicely.  It can be slowed down, squashing the waves closer together. It also travels in a straight line unless it passes through something.  This is what causes shadows.  The light can’t get through you (or other opaque things), so it leaves a void behind you.

Light can be bent by transparent things, though, like glass or water.  You’ve seen this with your straw in a glass of water.  The straw looks much bigger and appears to come out at a different spot through the water.  This is called refraction.  It is interesting enough to keep you from focusing on your grumbly tummy at a restaurant, but doesn’t change anything.  But for a spear fisher (or fishing bird), understanding the refraction power of water is very important! 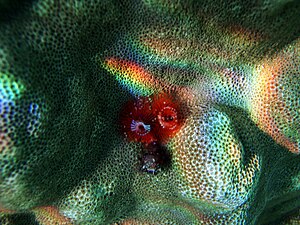 Rainbows work by bending light as well.  God designed the different wavelengths (colors) of light to bend more or less.  When white light passes through a prism, the purple gets bent the most and red the least.  This allows the light to spread apart so we see each color on its own.  I think that was very sweet of God, myself. 🙂

As for darkness, does it move?  Is is a substance we can study?  Much as scientists today talk about “dark matter,” they use that name because they can’t study it, just make guesses about its existence.  Darkness does indeed have a “place.”  It is everywhere that light isn’t!

And God saw the light, that it was good: and God divided the light from the darkness.
And God called the light Day, and the darkness he called Night. And the evening and the morning were the first day.  Genesis 1:4,5

Which alone spreads out the heavens, and treads upon the waves of the sea. Job 9:8

A while back I mentioned that God made a big deal about how He is “stretching out the heavens.”  I find this whole idea fascinating, so I wanted to write an article just to discuss this.

Let’s see what the Bible has to say about what God did to outer space when He made them.

The word used in all of these that we have translated as “stretched” is Naw-Taw. This is the same word used for pitching a tent in Genesis 33:19 and Exodus 33:7.  It can mean to bend away like a stream or runner changing course (Numbers 21:15; II Samuel 2:19), which is very much what modern tent poles do when you set them up!  It is also used when God or others stretch out their arm over something or someone (Exodus 15:12; Joshua 8:26).

You will notice that I divided my list into “ongoing time” and “past time.”  That’s because the form of the word tells us this. The last 3 verses use the past tense and mean it happened before in a special event. The rest are in the continuing tense, which is easy in English, we just add “ing“!

Genesis chapter 1 only uses the ongoing verb form to talk about things that continued to happen after Creation Week.  For example fruit trees “yield” seed, living creatures “move”, and creeping things “creep”.  The ongoing form isn’t used to describe any of God’s creative, one-time-and-finished acts. But seven times in our list it is used to talk about God’s work of stretching the heavens out.  What does this tell us?  That we can expect to see this as an ongoing event unlike the past-only events of the 1st Week.

To my knowledge, before Einstein and his generation began taking their observations to logical conclusions, no one took the time to think through these verses and make scientific predictions.  I wish they had, because they would have been able to predict what we see happening in the universe.  As I pointed out, it was the observations improving telescopes were making that forced scientists to abandon their belief in a steady state universe.  What was it they were seeing that led them to this new way of thinking? The heavens being stretched out like a tent!

Source of light moving to the right

No other religion or even ‘Science’ can claim to have expected all of this.  The scientists of the early 20th Century fought hard to avoid having to face a changing universe.  But God had been telling us this for over 3,000 years!

Oh, yes!! This isn’t the end of the story.  Check out what God says He’s going to do with the heavens someday:

Of old you have laid the foundation of the earth: and the heavens are the work of your hands. They shall perish, but you shall endure: yes, all of them shall wax old like a garment; as clothing shall you change them, and they shall be changed: Psalm 102:25,26

And all the host of heaven shall be dissolved, and the heavens shall be rolled together as a scroll: and all their host shall fall down, as the leaf falls off from the vine, and as a falling fig from the fig tree. Isaiah 34:4

Let us praise the great, powerful, really smart, and holy God who made us and controls everything there is!!!

Ah Lord GOD! behold, you have made the heaven and the earth by your great power and stretched out arm, and there is nothing too hard for you: You show lovingkindness unto thousands, and recompense the iniquity of the fathers into the bosom of their children after them: the Great, the Mighty God, the LORD of hosts, is his name,  Great in counsel, and mighty in work: for your eyes are open upon all the ways of the sons of men: to give every one according to his ways, and according to the fruit of his doings: Jeremiah 32:17-19

To show you kids what this process could look like, try an Universal Balloon experiment.

And from Creation Scientists, check out these eye-crossers:

(My favorite) Answers Research Journal: Beyond Distant Starlight: Next Steps For Creationist Cosmology

ICR: A New Creationist Cosmology: In No Time at All Part 1 and Part 2