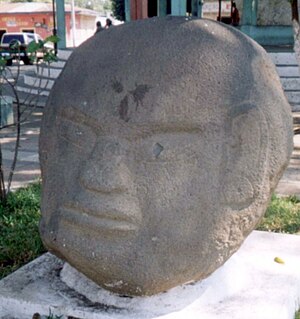 From Strange Attraction:  The Mystery of Magnetism on the Guatamalan magnetic sculptures, “One of them, for example, which is now in front of the little museum at La Democracia, Guatemala, bears a strong likeness to F.D.R., lorgnette eyeglasses and all.”

Shall I add this quote to my Ancient Optics post?

From Authentic Maya: Monte Alto “Of the collection of “fat boy” sculptures from Monte Alto on display in the town park of La Democracia, Guatemala and in front of its local museum, four of the heads and three of the bodies were found to have magnetic properties. All four of the heads have a north magnetic pole located in their right temples, while three of them have south magnetic poles below the right ear and the fourth (that in front of the museum) has a south magnetic pole in its left temple, Such a pattern of occurrence is unlikely to be a matter of chance, even in a sample size as small as four.”

Tell that to the biologists who see proof of a Designer every day!

From Science Daily: “The KU researcher said that scientists believe the stones were first created around 600 A.D., with most dating to after 1,000 A.D. but before the Spanish conquest.  “We date the spheres by pottery styles and radiocarbon dates associated with archeological deposits found with the stone spheres,” Hoopes said. “One of the problems with this methodology is that it tells you the latest use of the sphere but it doesn’t tell you when it was made. These objects can be used for centuries and are still sitting where they are after a thousand years. So it’s very difficult to say exactly when they were made.””

Well, is science wise enough to date them accurately, or isn’t it?  Make up your mind!

From Ancient Wisdom.UK “there are more than enough examples to show that stone itself was given a form of reverence in prehistory, and was likely seen as being endowed with ‘special’ qualities (as shown by the specific selection and transport of stone at Megaliths). Certainly other cultures appear to have become ‘besotted’ with stone carving such as the Easter Islanders, Egyptians, Mayans, and perhaps that is all
we see with carved petrospheres.”

Hmm, seems like the Bible has something to say about this:

And if thou wilt make me an altar of stone, thou shalt not build it of hewn stone: for if thou lift up thy tool upon it, thou hast polluted it. Ex 20:25

And there ye shall serve gods, the work of men’s hands, wood and stone, which neither see, nor hear, nor eat, nor smell.  Deuteronomy 4:28

And the LORD shall scatter thee among all people, from the one end of the earth even unto the other; and there thou shalt serve other gods, which neither thou nor thy fathers have known, even wood and stone.  Deuteronomy 28:64

And that which cometh into your mind shall not be at all, that ye say, We will be as the heathen, as the families of the countries, to serve wood and stone.  Ezekiel 20:32

“Then I saw all that God has done. No one can comprehend what goes on under the sun... Even if the wise claim they know, they cannot...” Eccl. 8:17