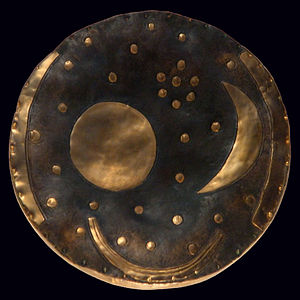 Ancient technology Friday!!I know how much we all love to hear about how smart our great, great great…. grandparents actually were, so here’s today’s installment.

I was looking around for something else and ran into this page with excellent pictures of intact crystal eyes on Egyptian statues.  Scroll down to the close-ups to see just how lifelike they are.  Here’s another guy, carved of sycamore wood with his eyes intact.  This goes along with my post on Ancient Optics.

And here’s a long page on ancient telescopes which covers basically the same info I’d already mentioned.  They also had something I hadn’t known showing how a large concave mirror can be used as a very effective telescope.

I also found more info on Nero’s eyeglass.  Turns out it was actually a monocle made of beryl, which is the bigger gem family that the emerald is a part of.  Most sites want to claim this is the first time someone used a vision corrector, but does that seem likely to you?

There are two things about the Ancients that make it hard for me to post much about them.  They were obsessed with the heavens and they were terribly into idol worship.  Of course, those two things are connected.  Although they used their observations of the movements in space to find their way around the world, they mostly used this knowledge to decide the best times to worship their gods.

You could go to dozens of webpages that talk about these things, but quite a number of them are by people with the same mindset.  Astrology is sadly still very popular.  I’ve checked each of these pages, but I don’t recommend wandering their sites without a grown up!  This one sticks to the facts and shows how common it is for most of the ancient monuments we’ve found to be aligned to the heavens.  Here’s one location they missed in Heath, Massachusetts.  Turns out it is aligned to the heavens too (check out that page for all the other structures people were building in New England back then!).  [I first heard about these places at s8int.com, the Christian site.]

Ancient people did more than make lenses to study the stars directly and build important monuments in alignment with the heavens.  Some of the most ancient pieces of artwork we have are really little moon and star maps.  It’s anyone’s guess what they were all used for.  I’ve seen someone who thought that one calendar would have helped a new mom figure out when her baby was due!  What we do know for sure was that the stars and heavenly movements were of great importance to people very soon after the Flood. If only they had remembered to honor the Creator God who maintains all these things for His own glory.

By the word of the LORD were the heavens made; and all the host of them by the breath of his mouth. Psalm 33:6

Thus saith the LORD, The heaven is my throne, and the earth is my footstool: Isaiah 66:1a

The children gather wood, and the fathers kindle the fire, and the women knead their dough, to make cakes to the queen of heaven, and to pour out drink offerings unto other gods, that they may provoke me to anger.  Do they provoke me to anger? saith the LORD: do they not provoke themselves to the confusion of their own faces? Jeremiah 7:18,19

Another page on the Nebra Star Map that’s worth studying.