Leprosy is a terrible disease that destroys the ability to feel pain. This allows people to do things that we would never do because it would hurt too much. Together with the leprosy bacteria, this causes such terrible damage that they can lose their fingers and the use of their hands and feet.

Both Eve and Adam were told they would have pain because of their sin. The ground was cursed to grow thorns and thistles for Adam, and Eve was told that bringing babies into the world was going to hurt (a lot). Genesis 3:16-18

Since the Fall of Adam and Eve, pain has served a very useful purpose in our lives. Our muscles and joints tell us when we are putting too much strain on our bodies. Our stomach lets us know when it is fighting germs and we’d better stop eating. And pain tells us when something is causing damage, like a thorn in our foot or sand in our eye. Without pain, our bodies wouldn’t last through our childhoods!

One of the things that Jesus did was to create us with the ability to feel pain, knowing that He Himself would be “the Lamb slain from the foundation of the world.” Revelation 13:8b. Growing up, I really didn’t like hearing about Christ’s sufferings on the cross. They are too horrible to imagine.

Christ designed the whole nervous system with its ability to send urgent pain messages to the brain. He knew all the time that Humanity would figure out how to cause the most pain for the longest time and use it on Him. No wonder Jesus prayed so hard in the Garden to escape having to go through what was coming That Day!

Thank God, He submitted Himself to His Father and went anyway!

Who in the days of his flesh, when he had offered up prayers and supplications with strong crying and tears unto him that was able to save him from death, and was heard in that he feared;  Though he were a Son, yet learned he obedience by the things which he suffered; Hebrews 5:7,8

Because of Jesus’ sacrifice, someday those in His kingdom will never again have to feel pain:

And God shall wipe away all tears from their eyes; and there shall be no more death, neither sorrow, nor crying, neither shall there be any more pain: for the former things are passed away. Revelation 21:4

I was going to just share this on facebook, but realized the topic is too important to let fall into the archives. You will be able to find this post whenever necessary under “Teens” (since working through issues like suffering are a big part of growing up).

Over and over the issue of a good God vs. suffering comes up. Unbelievers throw pain and injustice in the teeth of Christ’s followers, expecting them to crumple under the weight of sheer misery. Sadly, many of us do.

I’m recommending this interview to arm yourself to keep upright through the thorny, shadowed walk of life.

It doesn’t take long for most of us to realize you don’t have to be in physical pain to suffer. Suffering comes in many forms large and small. Why does it happen to us? Does God know? How can I love someone who lets us hurt like this?

All these questions are legitimate and deserve answers. God gave answers and encouragement in the Bible for those who will listen.

One of the reasons this particular talk is worth listening to is Pastor Grimmond’s realization that we need to start asking, and answering, these questions before suffering takes over. If we pretend nothing bad will happen to us as long as we can, we will be knocked down for sure.

It wasn’t quite this backed up, so the cars were moving faster!

When my brother had just gotten his license, we drove to downtown Chicago on the freeway. It didn’t take long for bunches of cars to pass us by, including a pickup truck with a mattress set tied to the top. My brother said to me, “if a mattress like that ever falls off in front of me, I’m going to go straight over it rather than risk an accident trying to avoid it.”

Not a minute later we watched as the mattress flew off the truck and landed less than 100 ft [30m] in front of us. Sure enough, we went right over the top, felt a slight bump, and continued safely on our way.

is the smartest thing any of us can do.

Following Jesus means we don’t have to pretend bad things can’t happen to us. It means being able to stare down the worst life can throw at us and know we’ll make it because we’re not alone. Of course, it also makes us cling to our Savior like crazy, but isn’t that a good thing?

Yea, though I walk through the valley of the shadow of death, I will fear no evil: for thou art with me; thy rod and thy staff they comfort me. Psalm 23:4

END_OF_DOCUMENT_TOKEN_TO_BE_REPLACED 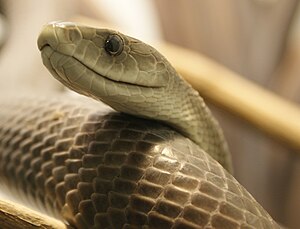 I never thought this would be one of the animals I wrote about for this blog (I do not like snakes!), but we’ve just learned something about them that is truly amazing.

First, what is a Black Mamba and why is it special?  The Black Mamba of Africa is named after the color of the inside of its mouth: inky black.  The rest of its body is a gray color; all the better to blend in.  They hunt in trees and, being cold-blooded, they like to hunt during the heat of the day.

The Black Mamba is well known for a couple of reasons:

Africa seems to have an unfair number of mean, deadly creatures.  They are all scared of the Mamba!  Of course, this isn’t the way a Mamba would tell the story; they just like to be left alone and are too skinny (3.5lb [1.6kg] adult weight) to deal with danger in any other way.  If it’s either the snake or the other creature, can you really blame them?

Although the Black Mamba can eat something 4 times the size of its head, it doesn’t really want to bother bigger creatures like lions and people.  Its favorite foods are much smaller.

Mambas are especially fond of rodents and birds. They even eat Hyraxs. 🙁  Most things they bite and then watch until the venom has slowed down their struggle.  Birds, they hold on to; who wants to have to spend extra energy chasing down their airborne lunch?

Here’s where it gets interesting:

We have just learned that Black Mamba venom contains not just deadly stuff, but a powerful pain-killer.  Many other snake venoms cause more pain, but the Mamba’s does the opposite.  Researchers have already tested mice with the stuff the Mamba puts out, called mambalgins (scientific names aren’t that mysterious).  It works.

Of course, the scientists don’t care much whether lab mice are in pain or not (or they wouldn’t use them), but they do care about people.  They are hoping to develop drugs that are as powerful as morphine to help hurting people.  The Mamba’s drug doesn’t seem to have a lot of the bad side effects that morphine and other powerful pain-killers do.

Now, let’s think about his for a minute.  We have a deadly animal-eater who turns out to inject a pain-stopper into its victims.  Why?  Does it make the meat tastier? Would the Mamba even know, since it doesn’t chew its food?

Is there some Evolutionary explanation to say that the Mamba was more likely to survive because it developed a complicated pain-killer to inject its food with?  If they say there is one, would you believe them?

How ’bout this explanation:

God, the Creator, knew that the Mamba needed to eat small animals after Adam disobeyed so the world wouldn’t be overrun.  He gave the Mamba everything it needed to keep that population in check.

God also made the little critters the Mamba was going to eat.  He knows when a sparrow gets eaten for lunch.  He knows when the little mousies get eaten, too.  So, He programmed the Mamba’s venom production to also make stuff that would make their lunch’s last moments less painful.

What is the price of two sparrows—one copper coin? But not a single sparrow can fall to the ground without your Father knowing it. And the very hairs on your head are all numbered. So don’t be afraid; you are more valuable to God than a whole flock of sparrows.  Matthew 10:29-31 NLT

Websites to check out:

Venomous Reptiles.org: The Black Mamba (from a snake catcher’s perspective)

“He only is my rock and my salvation, my stronghold; I shall not be greatly shaken.” Psalm 62:2