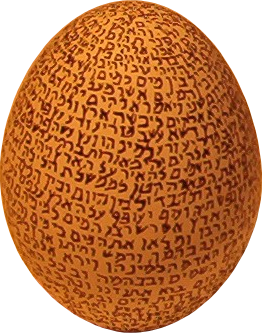 The first chapter of B’reshit, or Genesis, written on an egg, in the Jerusalem museum

If you forgot what YEC stands for, check out this post from Grace with Salt.

Today in my email, I had a look at the new posts from Dancing from Genesis and was excited to learn about what the Southern Baptist Convention has just done.

Their annual convention just finished up on Wednesday and, while they were there, a new president was elected.  It would hardly be something for me to notice (it is nice to see they’ve grown up since the Civil War) except that the pastor they picked is an outspoken Young Earth Creationist!   Reverend Fred Luter, of the Franklin Ave Baptist Church in New Orleans, has been to Answers in Genesis and has talked to them to about speaking at his church about the truth of the Human Race next year.  You can read more about his election and God’s hand in it at St. Augustine.com.

Many people who love Jesus very much think that the world is getting worse and worse (it is) and that there isn’t anything we can do about it but pray for Jesus to rescue us quick!  That’s just giving up.  There is a war on and we can be part of it; God isn’t any weaker than He was in the past and He will never stop working.

What God needs are people who will stand up and follow Him NO MATTER WHAT.  Let’s be some of those people.  As for me, my goal since I was a girl has been to get to Heaven with as much treasure as I possibly can win!! How ’bout you?

And I sought for a man among them, that should make up the hedge, and stand in the gap before me for the land, that I should not destroy it:

Sell that ye have, and give alms; provide yourselves bags which wax not old, a treasure in the heavens that faileth not, where no thief approacheth, neither moth corrupteth. Luke 12:33