How To Think: Kipling’s Just So Stories

Years ago my parents got a book on cultural literacy for us to study. We didn’t have to take tests, but Dad delighted in reading the bits that told how woefully ignorant people were without knowledge of certain literature and historical events. How would we know what someone was talking about if we didn’t know the context of the phrases and keywords they used? So, we learned just enough Shakespeare, Lord of the Flies, and many others to be well-educated whether we liked it or not. 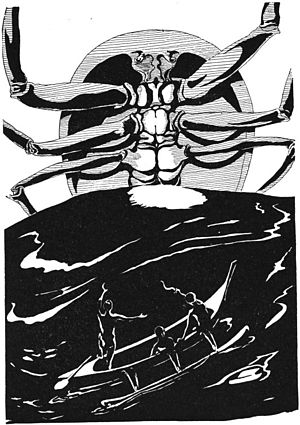 ‘The crab that played with the sea’ by Rudyard Kipling

One such cultural reference I often run into while reading Creationist articles is Rudyard Kipling’s “Just So Stories.”

You can read the whole book with Kipling’s original illustrations HERE. Many of the stories deal with how animals got to be the way they are. You will quickly notice that the expected vocabulary of an upper class child in 1902 was far greater than today’s!

Why are we so fond of mentioning an odd set of fantasy stories from 100 years ago? Because the kind of reasoning that Kipling used to “explain” animals’ appearance and behavior happens all the time. Except, nowadays, the scientists expect us to believe their inventions are true history.

A prime example of this is the Evolutionary account of the development of whales.  First, have a look at what Berkeley has to say about how they believe whales came into existence.  You will notice right away that they don’t dare claim any other animal as the “direct ancestor” of the whales. In fact, when you examine their lovely opening diagram, none of the “direct ancestor” connections are filled in; they are all lines where something is assumed to have existed.

Oh, wait! We meant THIS is the real ancestor of the whale

Even some of the skeletons shown, like Pakicetus, aren’t at all what Berkeley makes them out to be. Berkeley knows quite well that all we actually have of Pakicetus is its skull, but do you find that out on the whale evolution page? Hardly. If they were honest with the facts, people would laugh at them.

Creation Ministries International has taken on another of the supposed transitional forms leading up to the whale which Berkeley mentions. Their article, Rodhocetus and other stories of whale evolution, isn’t too long and has a great drawing showing how much guesswork went into the artist’s version. They also discuss the different stories Evolutionary biologists have come up with to get from land mammals to whales.

As you can imagine, we Creationists enjoy writing about whales. In fact, the Institute for Creation Research even mentions “just so” stories in their main article on Scientific Roadblocks to Whale Evolution.

Here are more articles talking about the impossible puzzle God set for us when He created whales:

Answers in Genesis: Another Whale of a Tale: Creationists Without a “Whimper”?

AiG’s long, detailed article comparing the story of whale evolution to the story of truck evolution: Walking Whales, Nested Hierarchies, and Chimeras: Do They Exist?

And some articles talking about “Just So” stories in Evolution:

Proposed evolution scenarios are just-so stories (a discussion of statements by Talk.Origins) at CreationWiki. The blue boxes are the original statements and the white are the Creationist responses.

And God created great whales, and every living creature that moves, which the waters brought forth abundantly, after their kind, and every winged fowl after his kind: and God saw that it was good. Genesis 1:21

People knew God, but they did not honor him as God, and they did not thank him. Their ideas were all useless. There was not one good thought left in their foolish minds. They said they were wise, but they became fools. Instead of honoring the divine greatness of God, who lives forever, they traded it for the worship of things made to look like humans, birds, animals, and snakes. Romans 1:21-23 Easy-to-read Version

How can evolutionists say a whale evolved from a hippo. I’ve never herd such nonsense in all my life. exept of course answersincreation.org might go down the evolutionary road. I have to say now my time is better served studying creation history and ice age civilizations and using the Ussher time line to date them given Darrell White’s encouragement, John

If you were determined to not see Jesus in the natural world, you’d find these explanations quite sensible. What else would you expect when a person abandons the source of logic and truth?

Hi Cherie!
Thanks so much for posting! I really enjoy reading them!

You’re welcome, it’s fun.
BTW, you almost got put in the spam folder for vague flatter until I saw what website was putting the comment up! 🙂