Last month I asked Dr. Jason Lisle  if he had done a book that talked about all the Bible references to astronomy.  Sure enough, he had done one called Taking Back Astronomy.  As soon as I could I bought a copy and I’m thrilled with it.  Since Dr. Lisle’s new book, the Stargazer’s Guide to the Night Sky is published by the same group (New Leaf Publishers, the one’s I want to write for someday), it is sure to be beautiful enough to display as a coffee table book.   But, this isn’t a book review post (I’ll do those when this blog is popular enough to get free samples to review), so on to what the Bible has to say!!

My dad showed me a couple of years ago how he had noticed God talking about “stretching the heavens,” which I’ve already posted on.  That alone is enough to prove that the Bible knows what it’s talking about on the nature of the universe. The rest of these are just icing on the cake.

It is he that sitteth upon the circle of the earth, and the inhabitants thereof are as grasshoppers; that stretcheth out the heavens as a curtain, and spreadeth them out as a tent to dwell in: Isaiah 40:22

Doubters like to say that this verse proves that the Bible writers thought the earth was flat like a plate, and they’re right that the word here doesn’t mean sphere or ball.  The word used for circle is the geometric word for compass it just tells you that God drew a circle on the earth.   There are two other verses that use this term, Job 22:14 and Proverbs 8:27, both of them are talking about astronomy too. As we know, people from right after the Flood were sailing the world and well knew that the earth was a sphere. But if you look at the earth from space, it does looks like a plate.  Isaiah was pointing out how big God is.  Notice that this is one of the “stretching the heavens” verses!  It is wonderful how they all fit together.

He hath compassed the waters with bounds, until the day and night come to an end. The pillars of heaven tremble and are astonished at his reproof. Job 26:10,11

Here we have the verb “to compass” much like in the last verse.  Dr. Lisle takes this to mean that the twilight line dividing the day side of our planet from the night side is always a circle.  I hadn’t realized this verse was talking about astronomy until I read that verse. 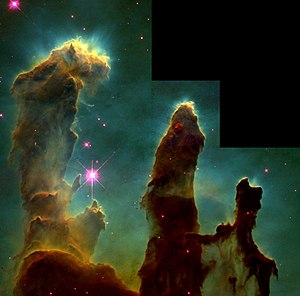 Verse 11 is not mentioned in Dr. Lisle’s book, but I would guess that doubters like to say this verse means that Job thought there were pillars holding up the heavens.  You might want to try this idea on for size.  The “pillars” of heaven don’t have to be stone columns because the Hebrew word is the same one used for the “pillar of cloud by night” in Exodus. Perhaps Job was talking about Nebulae!

I decided to do a GoodSearch to see what kind of technology it would take to see a Nebula since we know the Ancients had telescopes. This page says what you need is a big aperture.  So then I went to find out what that meant.  Turns out the bigger the glass, the better for this and we know that’s something the Ancients certainly had.

I have no idea if this is what Job was really talking about, but it’s a good possibility.  I also found that the first “modern” astronomer to record having seen nebulae was Charles Messier in 1758. Here’s a list of his telescopes, they don’t seem to have been too powerful, so it is quite likely that ancient telescopes were powerful enough to have seen some of these objects.

Know therefore this day, and consider it in thine heart, that the LORD he is God in heaven above, and upon the earth beneath: there is none else. Deuteronomy 4:39