This topic seemed good to cover since Master Books has put out a book on the same subject. Haven’t had a chance to look at it yet, but you can get an idea of the kinds of things it covers from my article I’m reposting:

A couple of years ago I ran into the book Eternity in Their Hearts by Don Richardson that discusses the memory many people groups have of the great Flood.  I had heard of the Babylonian myth of a cube-shaped boat and the gods landing on the sacrifice afterwards because they were so hungry.  That story in the Gilgamesh Epoch is often used to “show” that the Bible just borrowed and sanitized other cultures’ myths.  But like all the arguments non-believers use, this can cut both ways.

If the great Flood of Noah’s day actually happened, wouldn’t you expect his descendents to hold on to some memory of it?  If it was just a myth, why would people groups from all over the world reinvent the same false story?

This is one of the commonly known evidences of the truth of God’s Word that non-believers don’t want children to find out about.  They will talk about it among themselves, but Cosmos-forbid the little ones get the wrong idea! “Flood myths are told by probably the majority of human nations.” by Albert L. Kroeber in Anthropology from 1948.

Turns out the Babylonian story is just the “cube” on the tip of the iceberg.  I found an enormous page covering these stories.  I was going to tell you the total number of people groups Mark Isaak mentions, but when I saw how many more there were after counting to 100 I stopped!  Every part of the globe that people live in (so no stories from Antarctica!) has groups that remember some part of the Flood.  Mind-blowing and Awesome.

Illustration of the Black Sea deluge, before and after

An explanation worldwide Flood doubters have for why people “invented” flood stories is the filling of the Black Sea.  I once accidentally bought a book that claimed this.  I didn’t keep it, so I don’t recall the title, but I did read it (here’s a page with a pop-up ad that makes the same case).  The author explained that as sea levels rose long ago (which they certainly did, at the end of the Ice Age) suddenly flooding the fertile valley that is now the Black Sea.  I’m sure this happened.  But does that explain why they tell flood stories in the Pacific Islands and the Americas?  It takes just as much faith to believe that all humans were living in the Black Sea basin 7,500 years ago and carried the story around the world as it does for me to believe God’s Word.

Let’s compare what we have recorded in the Bible with all the other stories.  This page from Northwest Creation Network does a good job of this.  On their chart you’ll see that the only thing that every story has in common is destruction by water.  They’re chart shows that only the Babylon- Gilgamesh epic has all the story parts that the Bible mentions.  However, when I looked up that story on Isaak’s page, it didn’t say anything about people being wicked (and therefore judged), just that there were too many of them! 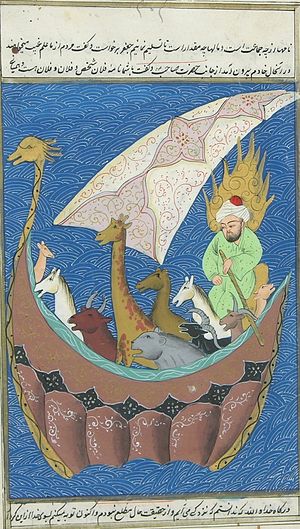 This is not the real ark!

Now, let’s look at the details the Bible gives compared to the other stories to see which fits reality better.  Any story (like the Gilgamesh epic) that has many gods landing on meat like flies doesn’t fit.  Neither does a boat shaped like a box.  The Chaldeans said the dimensions of width to height was 5 to 2, the Bible’s ratio is 5 to 3.  Not too bad.  The Lithuanians (along with a number of other groups) knew that the Flood came because of wickedness, but they said that people survived by riding in a nutshell.

I wanted to see what the Chinese story had.  It says that the flood lasted 22 years and didn’t quite cover the mountain tops.  Maybe that’s why they’re fond of living up so high.  The hero gets killed by the gods and after 3 years a dragon comes out of his cut open body. Yuck!

There’s lots more you could say about the believability of the Bible’s account compared to all these others, but the main point is: They still remember!!!

If you like this topic be sure to listen to this episode of Creation Today’s interview with Jeremy Wiles who’s been to a bunch of these places and heard their stories straight from the people!

I’m not going to link to it, but I saw a page where someone stopped believing the Bible because he claims there is no evidence of a massive flood just a few thousand years ago.  I have a verse for him:

Jesus quoted, That seeing they may see, and not perceive; and hearing they may hear, and not understand; lest at any time they should be converted, and their sins should be forgiven them. Mark 4:12

Here’s an article from Answers in Genesis on the seaworthiness of Noah’s ark.

God said, For this is as the waters of Noah unto me: for as I have sworn that the waters of Noah should no more go over the earth; so have I sworn that I would not be wroth with thee, nor rebuke thee.  For the mountains shall depart, and the hills be removed; but my kindness shall not depart from thee, neither shall the covenant of my peace be removed, saith the LORD that hath mercy on thee. Isaiah 54:9,10

The edition I have of Eternity in the Hearts from 1984 only cost 75c from half.com or there’s an updated one from Christian Book Distributors for $10 (both plus shipping)