This article was the first one I worked up for my then future blog/website. I had done my original research while preparing for an assignment from my writing school in late 2011. These adorable creatures still have a special place in my heart and I’d love to see some in their natural environment one day!

I was reading animal science with my kids the other day and ran into an animal I had never heard of before. I love home schooling!

The Echidna (Ih-kid-nuh) is classified in the same group of animals as the Platypus (for you older guys, look up Monotreme to find out why). It seems like Australia gets the really bizarre land critters because the short-beaked Echidna lives in Australia as well as Tasmania, Kangaroo Island and the lowlands of New Guinea [that’s the whole island including the countries Irian Jaya and Papua New Guinea]. They grow to be a foot to 15” [30-40cm] long and weigh between 4.5 to 15 lb [2-7 kg].

Scientists find animals like these confusing because they don’t fit into any of their tidy groups of animals*.  Echidnas have fur and quills like a hedgehog. Male Echidnas have a poison gland in their hind feet like the platypus. That’s why they got the Greek name for ‘adder’. But Echidna poison isn’t very dangerous, so they prefer to escape predators by rolling into a spiny ball like an Armadillo.

They are also amazingly fast diggers, able to throw dirt left and right about as fast as a man with a shovel can dig. Their hind feet point backward to help them get dirt out of the way even faster. This allows them to quickly hide their soft-furred underbelly and only leave their quill covered back exposed. When it’s time to hibernate, Echidnas will burrow down to a comfortable spot, but if enough leaf litter is around, they may live completely above ground.

Usually an animal this size has a life span of about 12 years, but not the Echidna! At zoos, Echidnas often live to 50 years old and one wild one is known to have survived for 45 years.

Mother Echidnas develop a pouch in time to place their newly laid egg in. After ten days a half-inch long baby hatches and licks milk from milk patches inside the pouch like a kangaroo. Since the baby, named a Puggle, is only partially developed when it hatches, it is hairless at first. When the baby’s prickles grow stiff enough to be annoying, the mom makes the little one get out but continues to nurse it until the young one is six to seven months old.

As cool as all these things are, one of the craziest things I found out about the Echidna is their skulls. They look a lot like the nozzle of a liquid soap dispenser! They have eye socket holes and a really long snout all in one piece. The lower jaw is just as long but shaped like a narrow V.

Echidnas have no teeth, instead they use their tongues to snag their food into their tiny 0.2” [0.5cm] mouths. The long-beaked Echidna of New Guinea has spikes along a groove of their tongue [think Velcro] that it uses to pull earthworms and occasionally termites or ants in with. Then its spiny tongue wriggles the food back up the snout to swallow.

The Australian short-beaked Echidna has a tongue that is so fast we gave this variety the Latin name Tachyglossus aculeatus. Which just means ‘fast tongue’. Instead of barbs, short-beaked Echidnas are equipped with saliva sticky enough to lick up the ants and termites it eats. This diet gave it the old common name Spiny Anteater. Like the Giant Anteater, Echidnas use their tongues to crush the bugs against bony plates along the top of their skulls to kill and soften the ants before swallowing.

Since their main diet is ants and termites, Echidnas live in a wide range of environments. They are found in most areas of Australia except where it is very hot. The long-beaked New Guinea Echidna lives all the way up to the snowy regions of the mountains. When it gets cold, these Echidnas will hibernate in a burrow much like a squirrel does. 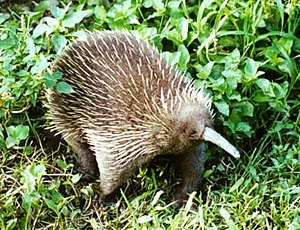 The long-beaked Echidnas of New Guinea are endangered because they are apparently quite tasty, so in many places they’re only found up high now. The Australian short-beaked Echidna is in better shape, as Australians seek to protect this small national treasure God has given them.

We’ve only found a few Echidna fossils, but, guess what?  They are still Echidnas, only some fossils show they used to be way bigger than the ones alive today.

All the pictures I could find of baby Echidnas are copyrighted, so head over to the Perth Zoo page to see how they look.

*I read where one guy thinks monotremes are examples of “transitional species” partly evolved between one form and another.

At the same time, scientists know the Echidna is well adapted to survive in its environment today. A transitional species would have many features that do it no good now, only becoming useful after million years.

Websites I used to write this article:

Close up of an Echidna Skull

Interesting chart of similarities and differences between Echidnas, porcupines, and hedgehogs: